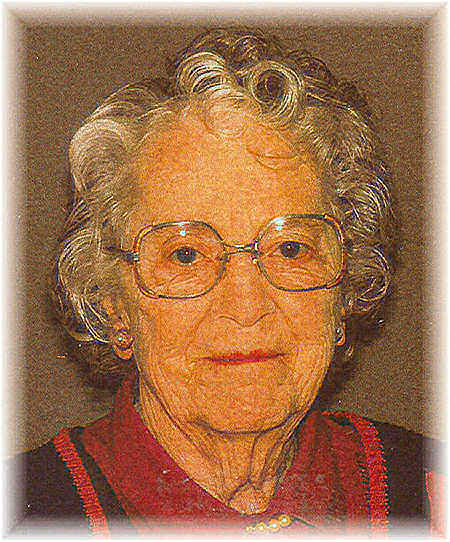 From Richland, WA, US | Born in Leadwood, Missouri

Lola Esther Allen DeMier, 101 years old, went home to be with her Lord on October 31, 2008 at home with her loved ones by her side. She was born at home in 1907 to Luther and Mercenia Allen, in Leadwood, Missouri. In 1924, she married Cecil Jay DeMier. After his death in 1966, she moved to Richland, Washington to live with her oldest son, Warren DeMier. She was a loving mother, wife, mother-in-law, grandmother, great-grandmother, sister, sister-in-law, daughter, aunt, niece, cousin and friend. She will be missed greatly by all who knew and loved her.

She was preceded in death by her husband, Cecil Jay DeMier; her son Durwood Leon DeMier, SR; her parents Luther and Mercenia Allen; five brothers, one sister, and a great-great-grandson, Elliot Michael Van Reganmorter.

Lola enjoyed the outdoors, hiking and backpacking in the Cascades. She loved her family, her cats, and anything "purple". Lola was a member of Leadwood Baptist Church in Leadwood, Missouri. In Washington, she attended Southside Church in Richland.

Rev. Al Rockey, Lola's nephew by marriage, and Rev. Bryan McNally, her great-grandson and Hospice chaplain, will preside at a memorial service to be held at the Boyer Funeral Home in Desloge, Missouri on Friday, November 7, 2008 at 2:00 PM with interment beside her beloved husband immediately following in the Adams Cemetery in Frankclay, Missouri. Visitation will also be at Boyer Funeral Home on Friday the 7th for one hour prior to the service.