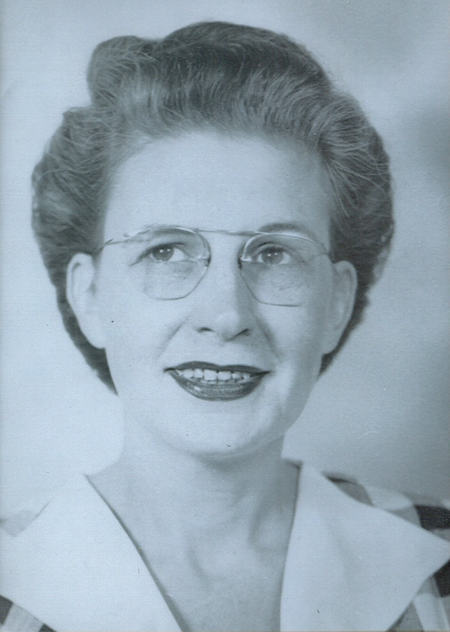 From Richland, WA, US | Born in Evansville, Arkansas

Oleta Lewis Cowan passed peacefully from this world onto the other side in the early morning of Friday April 17, 2009. Her daughter was with her. She was just weeks from her 98th birthday. Oleta was born May 15, 1911 in Evansville, Arkansas, a town just across a creek from what had just become Oklahoma. The family farm had been established by her great grandfather, Samuel Lewis on 40 acres of "bounty" land from the war of 1812 in an area inhabited by the Osage. It continued in the family as a farm and farrier business with her grandfather A.G. Lewis, who served in the Cherokee Mounted Division during the Civil War, then as a Deputy Marshall in Indian Territory; followed by her father A. E. Lewis, also a farrier.

After graduating valedictorian from high school, Oleta continued her education and later worked in Tahlequah, OK. There she married Robert Merle Cruse in 1941, with whom she had child, Robert Bobby Cruse. Her first husband left her a widow in 1946, when her son was just four years old. Oleta moved to Richland in 1947 to work on the Manhattan project at Hanford and there married fellow Okie Leslie A. Cowan. Bobby's name was soon changed by court decree, thus he was always known as Bob Cowan in the Richland schools.

Oleta was a highly skilled, erudite and dedicated employee, taking great pride in her work and professional appearance. Indeed, she remained a well groomed clothes horse throughout her life. Oleta retired in the 1970's as the executive secretary for 200 E, then headed by Harry Shaw. In her over 30 years of working in the area she acquired a plethora of stories – many of them she chose to take with her to the grave. At her death, Oleta had been a resident of Richland for 62 years, except the year she spent in Encinitas, CA with her daughter.

Oleta was preceded in death by her husband Leslie A. Cowan in 1980. Following the death of her husband, Oleta travelled frequently throughout the Pacific and Micronesia, where he daughter was working at the time. Oleta visited her daughter several times in Palau, where her oldest grandson was born, as well as travelled throughout Asia with her daughter. Oleta enjoyed people, looked for the good in them with an open intelligent mind, and called it as she saw it when she had something to say. Regrettably, Oleta was also preceded in death by her beloved son Robert M. Cowan in Nov. 2003. The loss of her son and attendant circumstances truly marred the last years of her life, weighing heavy on her heart.

The passing of Oleta marks the last of the children of A.E. Lewis. Oleta was preceded in death by her siblings Blanch Hudgins and William Greig Lewis, children of Martha Ann Lewis nee Greig, who died shortly after the death of Greig; Dan Lewis and Gatts Lewis, children of Catherine Lewis nee Denton, who also died shortly after childbirth; and Augustus Gus Lewis and Robert Mount Lewis, who like Oleta, were the children of Clara Mae Lewis nee Mount. Gus, Robert and "Mom Lewis" as she was known, all lived in Richland and are buried at Sunset Memorial Gardens. The other siblings remained and are buried throughout Adair County Oklahoma, or the Lewis Cemetery in Evansville. Her nephew Don Lewis, son of Gatts, is buried in Sumner, WA with his parents.

Oleta is survived by her daughter, attorney Suzanne Cowan Dimeff, a graduate of Richland's "Col-Hi"; her grandsons, Tao Etpison 23 and Trace Dimeff 13, and her son- in- law attorney Carl Dimeff, all of Encinitas, Ca. In addition, Oleta is survived by nieces and nephews; the children of Gus Lewis and Jan Lewis : Michael, Peggy, Steven Kelly and Sean, all of whom either attended or graduated from Richland and reside in Washington; the daughter of Robert and Martha Lewis, Debra Ann, who graduated from Col-Hi and lives in Virginia; several children and grandchildren of Blanch Hudgins; and Greig D. Lewis, the grandson of W. Greig and Fannie Lewis. Oleta's son, attorney Robert Cowan of Kenai Alaska had no children.

"Oleta" is an Osage name , though her family's heritage is intertwined with Cherokee Adair's and Alberty's, including Cherokee Judge Bluford W. Alberty. Oleta was proud to be proficient in the Cherokee language, and in her later years could be heard speaking it in her sleep.

The family wishes to thank Leigh Ann and the staff at Quail Hollow for their tender assistance in allowing Oleta to live in her vibrant, out spoken, spirited manner; as well as Lower Valley Hospice for their spiritual wisdom.

Graveside services will be held at 5 p.m on Saturday April 25 at Sunset Memorial Gardens; immediately followed by a reception celebrating her life at the on site reception hall at Sunset Memorial Gardens at Swift of the By-Pass Highway, Richland. The family requests that your express your thoughts and memories in the online guestbook at www.einansfuneralhome.com. In lieu of flowers, donations may be made in honor of Oleta Cowan to Lower Valley Hospice, 3220 Outlook Road, Sunnyside, WA 98944.