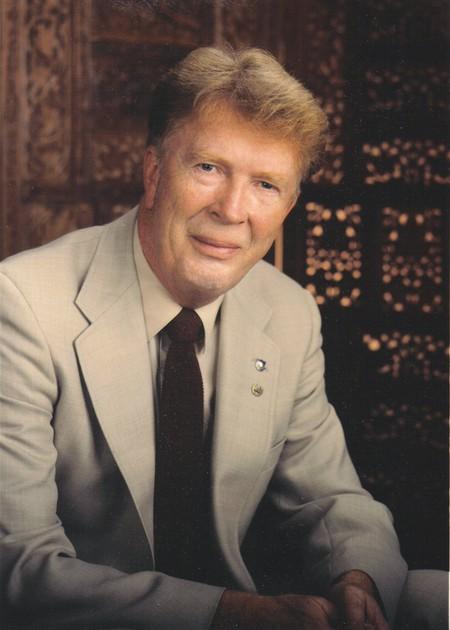 From Richland, WA, US | Born in Provo, UT

Curtis A Colvin passed away peacefully at the age of 81 on May 27, 2009 at Guardian Angel Homes in Richland, Washington. Curtis was born on May 14, 1928 in Provo, Utah to Tracy Sherman and Zella Vilate Colvin. He graduated from Brigham Young University where he studied Chemistry and was a member of the alpine ski team.

Curtis moved to Richland in 1952 to work in the Hanford areas as a Nuclear Chemist. Specializing in the extraction and refinement of Plutonium, he remained a dedicated worker in the Hanford areas until his retirement. He was a proud member of the National Management Association for many years and also served as President of the Hanford Chapter.

Curtis was an avid golfer and would often organize corporate golf tournaments for fun and enjoyment. As a member of the Washington State Referee Association he could be found running up and down the basketball court officiating in Jr. High and High School games. For many years he was also a member of the Rose Society and would raise award winning roses in several beds surrounding his home. All the joy he received from his accomplishments and personal endeavors would pale in comparison, however, to the joy he received by being with and following the accomplishments of his children and grandchildren. They were the light of his life and were the reason he remained on this Earth as long as he did.

Curtis was preceded in death by his mother and father, his wife Libbie and his brother Harold. He is survived by his sister Nyra Terry, his children Kim and Del Colvin, Julie Hughes and Kerrilynn Robinson; his grandchildren Chris Albrecht; Caitlin, Thomas, Rhys and Nathan Colvin; Erik and Nick Yoder; Tyson, Tanner and Libbie Robinson, and great grandchild Juliana.