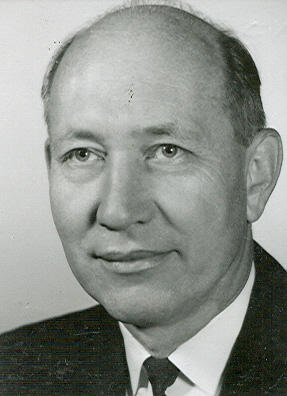 From Richland, WA, US | Born in Lake Mills, Iowa

Harley E. "Si" Hylbak died June 5th in Richland, Washington. He was born on June 3, 1917 to Elmer and Evelyn Hylbak in Lake Mills, Iowa and graduated from Lake Mills High School in 1935, the same year he received his Eagle Scout Award.

He graduated from Iowa State University in l941 with a degree in Mechanical Engineering. He met his wife Lucille, "Lou", at the university and they were married August 12, 1941 in Ames, Iowa by Dr. Alvin Rogness of Bethesda Lutheran Church.

They moved to Bremerton, Washington for five years during World War II where Si worked in the Puget Sound Naval Shipyard as a Marine Engineer. As a Marine Engineer he was instrumental in restoring many naval vessels carriers, battleships, and submarines, enabling them to return to fighting in the Pacific.

After a year assignment with the Bureau of Reclamation in Denver, Colorado, the family moved to Richland, Washington in 1947. Si worked for General Electric at Hanford for twenty years at 100 N. Area and held various engineering assignments. He continued working another thirteen years for Westinghouse Hanford on FFTF design and construction.

A licensed professional engineer in Washington and Colorado, he was a member of Delta Sigma Phi fraternity, American Nuclear Society, GESA Board of Directors, American Society of Mechanical Engineers, Richland Kiwanis Club, and a life member of the Elks. Lou was a legal secretary for Battelle Northwest for over thirteen years.

In 1980, Lou and Si retired and traveled extensively in Europe, South America, China, England, and the Scandinavian countries. Caribbean cruises were their favorite vacation trips. They also spent many winters in Palm Springs, California.

Si and Lou had two children, Janet and Gary. His daughter, Janet Armour and Bob Farnam of Livermore, California, and his son, Gary Hylbak and his wife, Susan, of Santa Rosa, California, survive Harley. Three grandchildren also survive him: Jason, Ryan, and Lauren. His parents, wife Lou, and brother Vincent, preceded him in death.