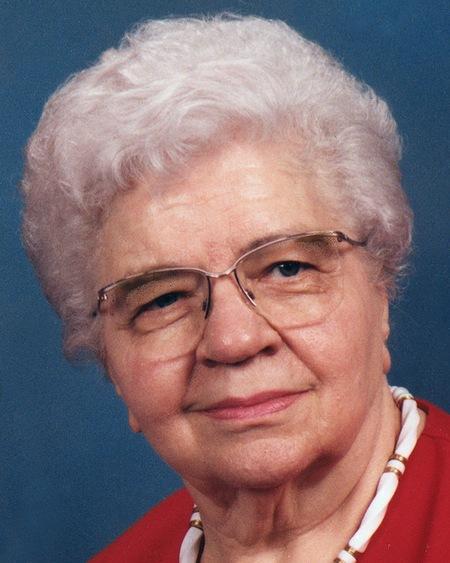 From Richland, WA, US | Born in Galva, IA

Elizabeth was born November 11th, 1918 in Galva, IA. She moved as a small child to Denver, CO where she grew up, went to high school and attended nursing school at St. Joseph's Hospital. Becoming a registered nurse in 1940, in her early career she worked as a private duty and hospital nurse, and was as a nursing instructor at St. Josephs during the war. In 1942 she met Val Schwinberg, the love of her life, who was stationed with the Air Force in Denver, and whom she married after his return from overseas duty after the war. In 1951 she and Val moved to the Tri-Cities where they established a home and raised four children. She was deeply devoted to her children and dedicated to all of them completing their education. She was also dedicated to her nursing career and her church. As a nurse, she worked for Kennewick General Hospital 1951-1954 and in 1966 resumed her career as a registered nurse at Kadlec Hospital where she worked primarily in the maternity ward until her retirement in the early 80's. After retirement she continued to work as a nurse on a volunteer basis. She was also involved in Christ the King parish, participating in the Fatima Band and parish scouting.

Among her many interests and passions were her family, friends, films, music, bridge, crossword puzzles, and traveling, She was part of several bridge groups throughout her life. She deeply treasured the long-term friendships from those groups, as well as, her friendships from work, the Fatima group, and other activities.

Val and Elizabeth celebrated their 60th wedding anniversary on March 5th, 2006 with family and friends.

Elizabeth , a.k.a "Kiddo", passed away on Thursday the 23rd. of October. She is survived by her brother Francis, children Jean, Paul, Monica, John and daughter-in law Sapna.

Friends and associates are welcome to pay respects at Einan's Funeral Home Saturday October 31st from 1 p.m. to 5:00 p.m. and on Sunday, November 1st, from 2:00 p.m. to 8:00 p.m. Funeral mass will be at Christ the King church in Richland at 1:00 p.m. on Monday, November 2nd with cemetery services to follow. Reception to be held at Christ the King immediately after. The family would appreciate any donations in memory of Kiddo to the United Way of Benton-Franklin County.