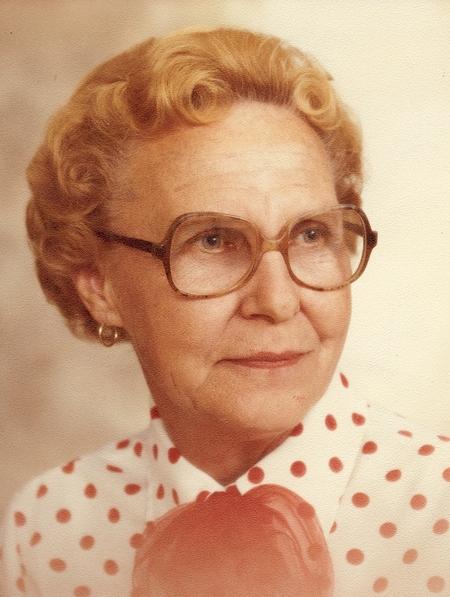 From West, Richland, WA, US | Born in Spoakne, WA

Marvel Elaine Munson, 90, of West Richland, passed away on October 12, 2009 in Richland. She was born on April 28, 1919 as Marvel Elaine Roestel in Spokane WA to Henry E..Roestel and Laura E. Ross. Marvel graduated from Rosalia High School in 1938 in Spokane WA.

She was married to Victor R. Munson on February 9, 1941. They chose to renew their vows on their fiftieth anniversary as a gift to one another. During WWII, she worked as a secretary at Galena Station, Fairchild AFB in Spokane. It was at that time she meant her husband Vic. After moving to Everett she then became a business women and owner of the White Spot Café in the early 1950's. After selling the business, she chose to manage various restaurants throughout Everett, WA.

With her husband's work being at the Hanford site, they moved from Everett to West Richland in 1973. While living at the same address for over 36 years she began watching the same children going to and from Tapteal Elementary School. She was known as Grandma to many of them. Many of those same children continued to stop by after they graduated from high school, later bring with them their own children.

Marvel and her husband enjoyed gardening, and her love of roses, playing pinochle, bingo, and Saturday night casino night. She held a great love and commitment to her family, friends and animals. She was a Member of the Moose Lodge of West Richland; she became a senior regent during for the period of 77-78. She was also a member of the First Baptist Church of West Richland and held a strong faith in the Lord.

Our mom was a two time survivor of cancer.

She was preceded in death by her parents, Henry and Laura Roestel, 2 brothers, George and Roy Roestel:, one sister Elvina Munk: Her husband of fifty one years Victor R. Munson, and her baby girl Sherry Linda Clause Munson.

Visitation will take place on Thursday, October 15, 2009 from 10:00am to 5:00pm at Einan's Funeral Home in Richland. There will visitation held on Friday, October 16, 2009 at Einan's Funeral Home, from 8:00am to 2:00pm. A graveside service will take place after visitation on the beautiful grounds of Sunset Memorial Gardens at 2:00pm. The family welcomes all friends and family for a gathering held at the Moose Lodge in West Richland after services.