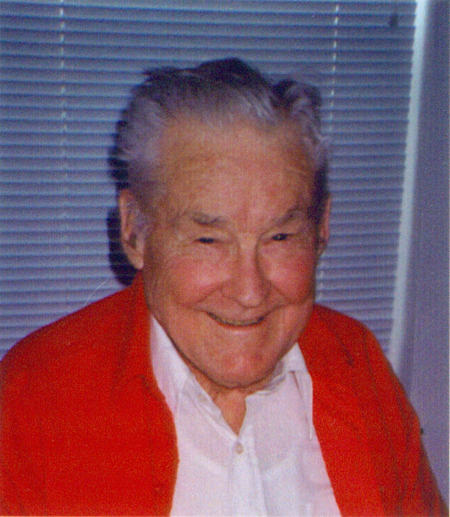 From Kennewick, WA, US | Born in Hazelton. ND

Dean C. Benson passed away in his sleep 18 Mar. 2010 at the Canyon Lake Rehabilitation Center in Kennewick. Our husband, father, and grandfather will be greatly missed by all of us, and also by his many friends who always expected to be delighted by his storytelling, songs, and jokes. Born at Hazelton ND 25 Oct. 1918, he grew up on South Dakota farms, and later excelled in discus and track in high school and at Sioux Falls College, from which he graduated. During WW II he served in the U.S. Army Air Corps and NACA later NASA as a photographer. After the war he earned his M.A. and Ph.D. in mathematics at Iowa State University and was a professor at several colleges, ending with 23 years at the South Dakota School of Mines & Technology, Rapid City 16 years as department head. He served on the Mathematics Association of America Board of Governors and remained an Honorary Member. He was a life member of the NRA. His favorite hobbies were camping, hunting, fishing, and rock hounding. He won awards for his black-and-white photography which he developed in his own darkroom, and for 66 years made his own unique photographic Christmas cards. Dean and his wife spent 6 months each year in Yuma AZ for 18 years. In 2004 he traveled to Norway with his daughter, where he visited two of his known ancestral farms and met Norwegian relatives. He is survived by his wife Ruth A. Benson, son Richard wife Shiping, daughter Micky Wu, daughter Kathy R. Doto, Kathy's daughter Pamela Jones husband Rik, daughter Alison, and Dean's brother Oscar of Sheldon, IA. Dean was preceded in death by his parents, his brother Lyle, and sister Rosemary Dahlquist.