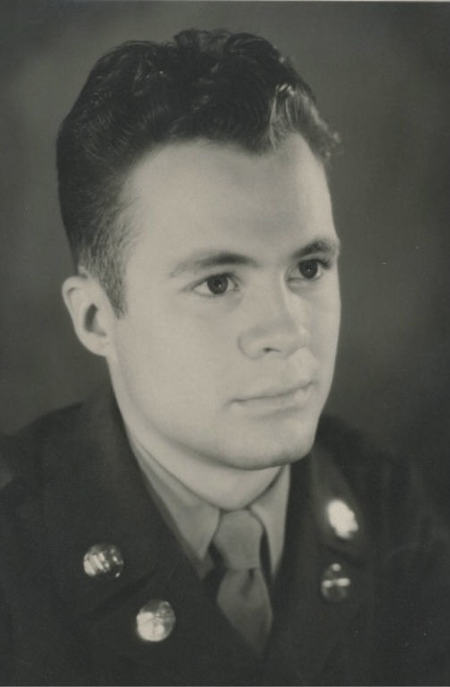 From Richland, WA, US | Born in Emmett, Idaho

Francis Homer Sherwood, longtime Richland resident, died at Kadlec Medical Center on May 26, 2011 after a long illness. Frank was born March 25, 1928 in Emmett, Idaho to Fred Homer Sherwood and Elinor Cast Sherwood. He had two sisters, Rosetta born in 1911 and Rhoena born in 1914. He was the seventh child of his parents, but all except one of the intervening children lived less than twenty-four hours due to the flu epidemics after WWI. Frank attended a two-room rural schoolhouse on the Emmett Bench, and then high school in Emmett until midway through his senior year; the day following his 18th birthday, having met all the requirements for graduation, Frank and his best buddy dropped high school and enlisted in the Regular Army for three years in the Infantry. Since VE and VJ day had both passed, Congress was talking of ending the WWII GI Bill of Rights, and Frank believed this would be his only chance for a college degree.

The following is a narrative written by Frank with some small additions by his family for his 50th high school reunion in Emmett, Idaho:

"On March 26, 1946, I enlisted in the U.S. Army for service in Germany. For the most of my tour of duty I was a newspaper reporter/photographer for the newspaper of the First Infantry Division, and was stationed in Bad Tolz near Munich, Germany.

In September 1949 I enrolled in the University of Idaho in chemical engineering, graduating in June of 1954. I was hired as a chemical/metallurgical engineer by General Electric Company, first in Anaheim, California. When I reported there it was surrounded by orange groves. When I left October 30, 1954 there was hardly even a smell of an orange, and Walt Disney was just starting the foundation for the Matterhorn ride at Disneyland. Further assignments took me to Bloomfield, New Jersey, and in March 1955 to Schenectady, New York. Here, I met Joan Ruth Sittner at the Schenectady Methodist Church Young People's Group.

I transferred to the GE plant in Richland, Washington in January 1956. On April 7, on a "long change" I flew back to Scotia near Schenectady where Miss Sittner and I were married, returning to Richland on April 10, 1956 via plane to Spokane and then by car through a horrific sandstorm at Ritzville to Richland. I was primarily a metallurgical process engineer at this time. In 1961 I switched to the Data Processing computer department and was involved in technical computer programming and information retrieval. Computer Sciences Corporation took over computer operations for Hanford in 1965, and I remained with them. I was involved both in Hanford plant support, and in CSC's commercial support projects.

I transferred to open a Seattle CSC office in the University district in 1968. Here I was involved in several projects for the Boeing Computer Division and in March 1970 a project for Safeco insurance company. This lasted until 1973 when I returned to Richland with CSC since the Boeing layoffs spelled the end of the CSC Seattle office.

Boeing took over the Richland computer operations in 1975. Again I remained in the same job. In October 1988 I retired, having worked for three different companies, and yet never having changed jobs or employers.

Since retiring, I have become one of those peculiar people called Genealogists. On a more productive note, I can report that my wife and I have two children, son David and his wife Ana Rose, and daughter Nancy Ruthanne and her husband David Lake. We are likely to bore all listeners with tales of our three granddaughters, and one grandson." Frank was by avocation a choral musician most of his adult life, beginning in high school and the University of Idaho, and continuing with the Octavo Singers in Scotia, New York, and Columbia Chorale in Richland – as well as a 25-year member of the traditional choir at Central United Protestant Church. He had a great love of Gilbert and Sullivan, and was thrilled to portray The Honored Judge in Richland Light Opera's 1985 production of Trial by Jury. He was a strong bass, and knew his part in The Messiah by heart.

In his later years Frank enjoyed travelling with Joan, being fortunate to travel all over Europe, including to the USSR, genealogy trips to England and Scotland, and return visits to Germany. A lifelong souvenir of his time in the army was a love of Bavaria and photography, resulting in his huge collection of cameras and decades-long ownership of BMW automobiles. Another enduring passion was for opera, and he and Joan had season tickets to the Seattle Opera for twenty-five years. And let's not forget bagpipes…

The family thanks the caregivers and staff at Richland Rehabilitation Center on Pike Avenue, Richland, for their loving care of Frank during the last two years of his life.

In lieu of flowers, memorial contributions can be made to the City of Richland, Parks and Recreation Department for the Memorial Bench Program in memory of Francis H. Sherwood, care of Phil Pinard.

Funeral services will be held at Central United Protestant Church on Tuesday, May 31, 2011 at 3:00 p.m., followed by burial at Resthaven Cemetery on Williams Boulevard.