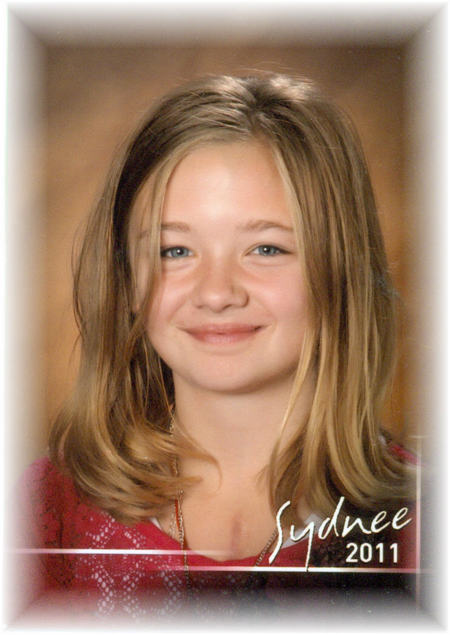 From West, Richland, WA, US | Born in Longview, Washington

Sydnee Ruth Neiman, 9, of West Richland, passed away December 8, 2011. She was born August 19, 2002 in Longview, Washington and had lived in the Tri-Cities for seven years. She was born with a rare heart disease. Usually children born with it are slower and tired most of the time, but not Sydnee. Her heart was strong, allowing her to survive four open heart surgeries.

She was always busy with many friends and activities. She would be outside with her friends sledding or building snowmen in the winter or swimming in her pool and jumping on her trampoline in the summer. She loved to ride her bike, scooter and skates. If she wasn't outside with her friends, she was inside with them playing her Wii, watching funny youtube videos, or playing with her Pokemon cards a huge collection thanks to her cousins Derik, Aaron, Jacob and Jared. She loved to listen to music currently Justin Bieber, doing art projects with Mary Joe or sewing with Grandma Neiman and cousin Jessica. In her spare time she read books, always telling mom and dad what chapter she was on. In 2010 she received a Make-a-Wish trip and traveled to Disney World with her parents, grandparents, and brother Erik. She went on vacations to Yellowstone, Grand Tetons and Glacier National Parks, Disneyland and SeaWorld.

Sydnee is registered at St. Joseph's Catholic Church in Kalama and a member of Christ the King Catholic Church in Richland. She was proud of collecting for the Jump Rope for Heart campaign at Tapteal School in support of the American Heart Association. She was a member of Girl Scouts. When she had too many stuffed animals she would send some to the Ronald McDonald House for other children to enjoy.

A memorial service will be held at 1:00 Saturday, December 17, 2011 at Christ the King Catholic Church in Richland.

Donations may be made at any GESA Credit Union in the name of Sydnee Neiman.