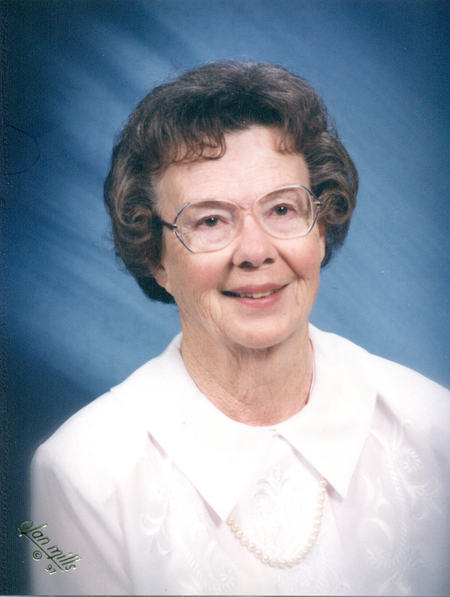 Gertrude Trudy Belle Morrish/Huckleberry was born February 24, 1922 to Guy B. & Norma E. Morrish in Oberlin, Kansas. Gertrude passed on to the Lord at the age of 90 on April 24, 2012 at Eagle Assisted Living in Richland, Washington. Trudy graduated from Decatur Community High School in 1940 and graduated from Fort Hays, Kansas State College in 1944 with a Bachelor of Arts degree in Zoology. She then took Medical Lab Technician training at Barns Hospital, St. Louis, MO, and became registered in 1945. Trudy worked as a Lab Tec at Pueblo Lab, Pueblo, CO, where she met Robert W. Huckleberry and the two were married on April 21, 1947 in her home town of Oberlin, Kansas. They moved from Pueblo to Longview, WA that year where she worked in the lab at Cowlitz General Hospital. In 1953 they moved to Richland, WA with two children, Marilyn and Paul, where she worked in a lab in the Medical Arts Building until she quit to go to work with her husband as bookkeeper/salesperson for Richland Paint and Floor Covering which later became known as Huck's Floor Covering. In her early years in Richland they had their third child, Kathryn.

Playing the flute was one of Trudy's passions. She learned to play at an early age and played the flute most of her life. She played flute in the Fort Hays Symphony Orchestra, and later in the 1960's to the 1980's in the Mid Columbia Symphony Orchestra. Photography was another of her passions. She was a member of the Tri-City Camera Club for many years, and she won many awards for her photos, one of which was published in a magazine. We do remember that you did have to have a great deal of patience when being involved with her photography as there was no room for less than striving for perfection. For many years she enjoyed playing golf on the old Sham-Na-Pum Golf Course and later at Horn Rapids Golf Course. She loved playing with and the comradery of the ladies she golfed with. She grew up in the church and spent her entire life in pursuit of the Lord.

The family would like to thank the staff of Eagle Assisted Living for the wonderful and loving care they provided our mother for the last two years of her life. Thank you Andrea LPN, Brandee, Delia, Enedina, Fatima, Irma, Kate, Kellee, Monica, Nancy, and all the rest working and caring for others there. We would also like to thank Hospice Tri-Cities Chaplaincy for all the care they have bestowed upon our mother.

A celebration of her life, with music and desserts, will be held on Sunday May 6th, 2012, 2:00pm @ SouthSide Church, 517 Jadwin Ave, Richland, WA. In lieu of flowers, donations may be made in Trudy's name to Mid Columbia Symphony or to Hospice Tri-Cities Chaplaincy.