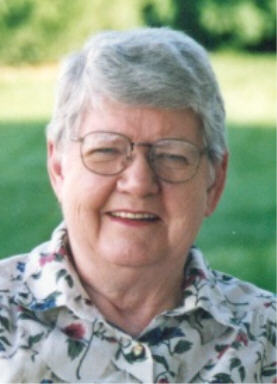 From Richland, WA, USA | Born in Enterprise, OR

She met Ed, her husband of 60 years, when her family traveled to Chicago for the wedding of her brother, Keith, and Ed's sister, Ann. The families met again six months later in Enterprise, OR for Nina and Ed's wedding on August 15, 1946. They moved to Chicago where they lived until returning to Enterprise, OR in 1949.

They moved to Richland, WA 1951 where they raised their family. Soon after moving, they joined Redeemer Lutheran Church. Nina loved music and spent many years singing in the choir. She also participated in LWML, Thrivent, Alter Guild, and Vacation Bible School.

In 1966 she went to work as the office manager of Richland Cemetery Association. She enjoyed her years there and finally retired in 1991. For years she enjoyed doing various crafts with her close friend, Evelyn Schmelzer. She especially loved making things for her children and grandchildren. After retiring she joined the VFW Auxiliary with her good friend, Jan Dykeman because Ed and Cliff were members of the VFW Honor Guard.

Nina was preceded in death by her husband Ed; her parents, her brothers, Marion and Keith; granddaughters, Michelle and Lisa DeHart and great-grandsons Blake and Gavin Davis.

There will be visitation held on Wednesday, April 25, 2012 from 6:00pm-8:00pm at Einan's Funeral Home in Richland. A graveside service will take place on Thursday, April 26, 2012 at 1:00pm at Sunset Memorial Gardens with a Memorial Service to follow at Redeemer Lutheran Church at 2:00pm in Richland. In lieu of flowers, the family asks for donations to the music program at Redeemer Lutheran Church or a charity of your choice.

We would like to thank Leslie Canyon Adult Home for the wonderful care they gave our mom.