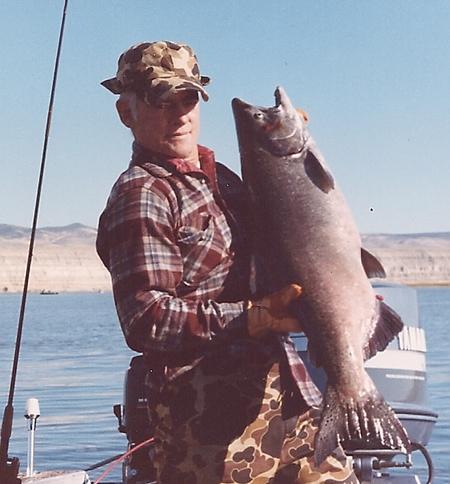 From Richland, WA, US | Born in Home Creek, VA

Lee Justus, 73, loving husband, father, and grandfather broke through the shackles of this earthly life and went to meet his Maker early on the morning of May 13, 2012, at his home. Surely a celebration of welcome and joy is his as he once again meets those who have proceeded him through this veil. Those he had to leave behind are already missing him, as he was a man that in many ways, was larger than life. He will be remembered for many things. Everyone will miss his cooking. An icon when it came to the old time ways of Southern cooking, others tried to emulate him, but the taste of his food was so elusive, it couldn't be duplicated, just enjoyed.

Lee obtained a Master's Degree in college. After the Army, he and his best Army buddy, Ed Coniconde, traveled West, worked at Yellowstone, moved to Spokane, WA where Lee worked at the Veterans Hospital and in construction while completing Airplane Mechanics training. He moved to Richland, WA in 1978 where he was employed as a Radiation Protection Technician. After leaving there, he opened a successful business, Seven Rivers Fishing Guide Service, and later customized a hand cream, Seven Rivers Industrial Strength Hand Cream, which was sold throughout the United States and in several major stores. Tiring of that, he became licensed as a General Contractor, Custom Mobile Home Repairs, where he worked until 2003 when he was forced to close it down due to being hit, as a pedestrian, by a semi truck and trailer. He spent the rest of his life at home surrounded by his family and dogs, especially close to his pomeranian shadow, Foxy.

Viewing will be Friday, May 18, between 6 to 8 pm at the Jadwin LDS Chapel at 1321 Jadwin Avenue, Richland, WA, Funeral service will be Saturday, May 19, at 2 pm at the Jadwin LDS Chapel and everyone is invited to a special graveside celebration, Sara's tribute to her father, with shared stories of his life and a little bit of rock and roll, led by Ed Dailey, followed by military honors at 3:30 at Sunset Memorial Gardens Einan's located at 915 By-Pass Highway, Richland.

Friends have set up a Lee Justus Memorial Fund to help with medical and funeral costs at Bank of America in Richland, account #138101356729.