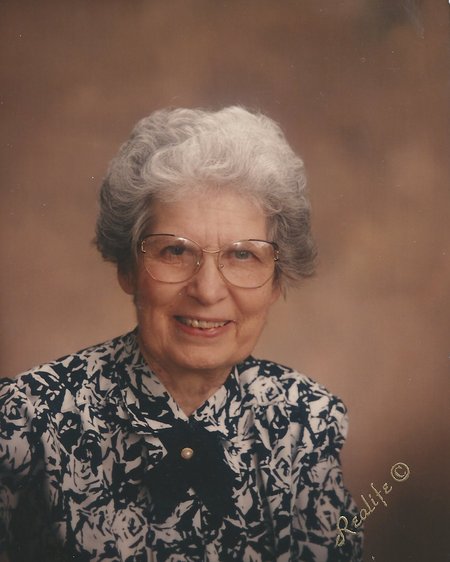 Nina Hames, beloved mother, grandmother, and great-grandmother passed away into the arms of the Lord Tuesday October 23, 2012.

Nina Hames was born Nina Lee Ryals on April 16, 1922 in Maitland, Missouri to Dewey Lee and Lester Ryals. She was the youngest of three girls. Her oldest sister, Alma Hunnicutt, of Richland, WA preceded Nina in death in 1966, and her other sister, Helen Rogers, of Little Rock, AR also passed in 2004.

Nina married Arlie F. Hames on March 8, 1942 in Dardanelle, Arkansas. They then moved to Camp Kilmer in New Brunswick, New Jersey where Arlie served in the Army during WWII. During their time in New Jersey Nina worked for E.R. Squibb and Co. in the lab, a job that she was very proud of. After the war Nina and Arlie moved to Pasco, WA, where Arlie began work at Hanford. Soon after, Nina gave birth to her first son, William Lester Hames, in 1947. Bill now resides in Kennewick with his wife Pam Hames where he is Senior partner in the Law Firm Hames, Anderson, Whitlow, and O'Leary. Their two sons, Nina's grandsons, Robert Hames, a warehouseman, and Michael Hames, a computer programmer, also live in Kennewick. In 1951 Nina gave birth to Arlie Franklin Hames, Jr. Frank who now lives in Dallas, Texas with his wife Karen Luddeke Hames. He is a musician and composer and co-owner of the Music production company Bryant-Hames Music, which creates musical scores for movies and other media. Their two children, Nina's grandchildren, also live in the south. Dr. Kasey Hames, a biologist, lives in St. Louis and John F. Hames, a musician, lives in Dallas. In 1960 Nina gave birth to her daughter Gina L. Hames. Dr. Hames is a historian, lives in Tacoma, and teaches at Pacific Lutheran University. Nina has 6 great grandchildren, all of whom live in Kennewick, WA. Nina's greatest pride in her life was the success of her three children. Nina was preceded in death in 2004 by her husband of 62 years, Arlie.

Nina lived a full and interesting life. In addition to her work as E.R. Squibb before her children were born, she worked for Fred Meyer in Richland and Battelle Northwest Labs after all of her children left home.

Nina had a strong Christian faith. She prided herself on reading the bible and having time for prayer every day. She was a Methodist and attended Central United Protestant Church in Richland, WA for almost 50 years, where she raised her three children in the church. More recently she belonged to the Cathedral of Joy in Richland for almost 10 years. Throughout her life she volunteered at these churches as well as at United Way.

Moreover, Nina was generous and believed in helping those less fortunate. For dozens of years Nina sponsored children in Guatemala, Nicaragua, and Bolivia so they could go to school. Nina also belonged to the Rebekah's Lodge where she was inducted as the Noble Grand in 2002. Nina also loved music and played the piano from a young age. As a young girl, she and her piano teacher were hired to play the music in the local theater in Plainview, AR., for silent movies. Nina instilled the love of music into her children. Bill played the trumpet, Gina played piano, and Frank plays many instruments. She enrolled her three children in music lessons and enforced three-hour per day practice sessions for all three. She instilled a work ethic and discipline, which resulted in her children's successful careers. Nina also had a love of literature. She loved Shakespeare, and read all of his works. After she retired, she took literature classes at Columbia Basin College. Nina also wrote compelling poetry and kept extensive journals.

Nina loved animals. Throughout her life she had many dogs that she loved dearly: Peanut, Brandy, April, Fritzi, and Bonita. During her last years in the Manor at Canyon Lakes, she had her beloved cat, Candy.