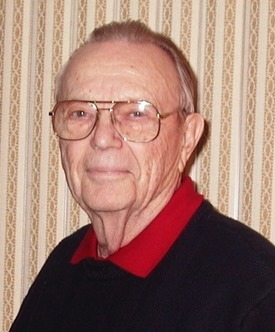 From Richland, WA, US | Born in Spokane, WA

John Rayburn Carrell was born in Spokane, Washington in March of 1925 and left us on March 3, 2014. John prepared the details of his obituary for his family, not because he lacked faith that the family would get it right, but because he wanted to make sure that he got the last word. Some of his last words reflected his unique sense of humor as he wrote, "As you read this, I will be a handful of dust and a wisp of vapor drifting over those ever suffering poor downwinders" as well as "Living was easy, it was the fear of dying that worried me to death". Nevertheless, his passing, in his own home, was peaceful.

John attended Lewis and Clark High School in Spokane and the family moved to Seattle in his senior year where he graduated from Roosevelt High School in 1943. He volunteered for Navy Flight Training during WWII, and thanks to the USA's defeat of the Japanese Navy, he was reassigned to deck officer training at the University of California, Berkley. He later transferred to the University of Washington and was an associate professor at the U of W in his senior year and graduated as a Mechanical Engineer in 1947.

John met his bride to be, Helen Burge, at the University of Washington and they were married on July 11, 1948, after John had graduated and secured a job with General Electric at Hanford. At first they lived in Richland, then moved to Schenectady, New York and then to Erie, Pennsylvania. While in the GE creative engineering program he received two patents, one for the first ice cube tray that popped frozen ice out of the tray which later led to automatic icemakers, and another for the magnetic seal on refrigerator doors which eliminated the need for a latching handle. John and Helen returned to Richland in 1950. They also lived in Kennewick, Pasco, and in 1973 San Jose, California.

John served three years in the United States Navy and worked 30 years as an Engineer and Engineering Manager for General Electric, Douglas United Nuclear, Westinghouse, and retired from Battelle in 1988. He was active in the National Society of Professional Engineers, and held local, state, and national offices including being a national director. He also was president and founding member of the Tri-Cities chapter of Washington Society of Professional Engineers WSPE. Additionally, he was a life member of the American Society of Mechanical Engineers. John worked on design and engineering management for the last six reactors at Hanford: DR, C, KW, KE, N, and FFTF. He was also active on fuel fabrication and waste solidification. John believes all his work has been mothballed and is now buried, too.

John, like many in the generations before him in his family, had musical talent. He played the slide trombone for 77 years, composed midi music on his computer, and built a functioning pipe organ out of plastic PVC pipe and scrap lumber. He put on many beautiful concerts in his retirement for his family and friends.

In his younger days John was an active hiker of the Cascade Crest Trail and the family had many backpacking and camping vacations. While his children were growing up, John owned different boats for fishing, camping, and cruising the Columbia and Snake Rivers. John had many pets as a child and encouraged his children to have a multitude of animals including two monkeys, magpies, frogs, snakes, and turtles as well as a cat and a dog. John was an avid Seattle Seahawks fan and the team's decisive Super Bowl victory couldn't have come at a better time for him.

All of John's children, other family members, friends, nurses and his special friend, Marion, spent time at his bedside as he ended his journey here. He is survived by his children, Don Carrell and wife Sue Kuntz of Colorado, Janet Stoffel of Oregon, Bob and wife Dottie Carrell of Richland, and his older sister Marguerite Miller of Oregon. He is survived by four grandchildren, seven great grandchildren and five nieces and nephews.

A "Celebration of Life" will be held at Bob and Dottie's home in Richland on March 29th at 1 pm. For further information about the celebration, contact Einan's Funeral Home. Donations may be made to a charity of your choice.

John wrote this poem for his obituary:

I've done just about everything I ever wanted to do. I've even tried a few things I couldn't do. And I have done several things I didn't want to do. I've done some things well, for which I am proud. I've done a few things that I wish I hadn't allowed. I have not done all that I can pursue. What I haven't done you'll have to do. I AM FINALLY DONE!