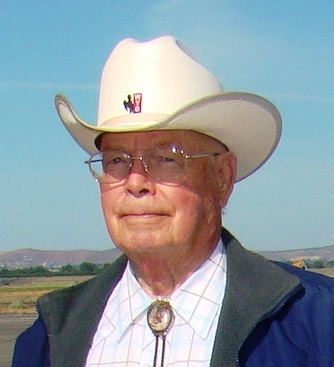 From Kennewick, WA, US | Born in Cheyenne, WY

In Kennewick Washington, the pre-dawn hours of March 10, 2014, concluding an earthly pilgrimage of 90-plus years, Lester Howard Johnson found rest in the arms of his loving Savior, Jesus Christ. Born March 16, 1923 in Cheyenne, Wyoming, the only child of Henry A. Johnson and Mildred L. Brady Johnson, Lester slipped away just six days short of his 91st birthday, a day when a family celebration had been planned to commemorate the occasion. That event was held on schedule. Though absent in body, Lester was there in spirit, and the family rejoiced in his memory and his big new home in heaven.

Lester spent his youth growing up on farms and ranches in eastern Wyoming in the depth of the Great Depression. His parents conferred on him their own pioneer ethic of faith, generosity, and unrelenting work – tending the cattle and the reluctant soil through the summer heat and bone-chilling cold of winter. Seeking a better opportunity, the family relocated west to an irrigated homestead in Riverton, where they built their new house of adobe clay bricks dried on-site in hand-made forms. Lester graduated from Riverton High School where he excelled in football and track. He married his school sweet heart Eleanor Lucero on August 3, 1942, commencing a union that would endure for nearly 60 years.

Having barely begun his full-time commitment to marriage, the farm and his small but increasing dairy herd, Lester, like thousands of his peers, was called away to serve his country in the armed forces already pitched in the raging battles of World War II. Enlisting in the Army Air Corps in January, 1944, he was reassigned to basic infantry training and the parachute troops. Upon graduation from jump school in Fort Benning, Georgia, where he was also trained in demolition and explosives, he immediately went overseas, ultimately joining the renowned 101st Airborne Division. His initial action, June 6, 1944 was a D-day Normandy invasion drop behind enemy lines in France. Subsequently he jumped in the Holland invasion, was wounded twice in the Battle of the Bulge, and finally made a parachute drop across the Rhine near Wesel, Germany. His valor in these engagements earned many commendations.

Returning to his parents' farm after World War II, he took on other challenges as a seismologist in the oil fields of Wyoming, Montana, and N. Dakota. Employed by Pure-Oil Corporation, he evaluated and helped lay out well sites. However, still being on active reserve in the United States Army, Uncle Sam was not finished with him, and he was called to duty in the Korean conflict in October, 1950. He saw intense action there as a demolition specialist and was discharged finally in July 1951. For all of his military exploits he was awarded multiple medals including the Silver and Bronze Stars with Oak Leaf Clusters, three Purple Hearts, the British Military Medal, and citations from France and the Republic of Korea.

Scarcely readjusting to civilian life on the farm back at Riverton, Lester was seriously injured in the operation of a farm implement and spent months at the VA hospital in Cheyenne. It was during this convalescence that he and Eleanor fully sensed God's call to Christian ministries, but as a veteran he qualified to be placed in a drawing for a unit of irrigated land in the newly developing Columbia Basin Irrigation Project of Washington. In 1954 he was successful in drawing Unit 2 in Irrigation Block 13 near Mesa in northern Franklin County. It was determined that his parents would re-locate to Washington soon thereafter and operate the farm in his stead.

Upon sufficient healing wherein it was confirmed that his injury would not require an amputation, Lester and Eleanor packed their belongings and two small children to enroll Lester in Rockmont Bible College in Denver, CO. Two years at Rockmont were followed by two additional years at Powellhurst College and Western Baptist Seminary in Portland, OR. In 1957 he received a B.A. in applied religion. His full commitment to Jesus Christ along with this formal training equipped him to embark on a 50 year calling to the establishing and sustaining of evangelical churches, mostly in rural areas of Washington, Oregon, and Idaho. Though he never farmed again, he was a frequent visitor to the Columbia Basin and always loved the enormous changes he observed there over the years. And though he left the ranch, the cowboy spirit still remained, and he would generally be seen wearing his white Stetson, western boots, and string tie.

He was ordained as minister in Summerville, OR in 1960. He came to be known most affectionately as "Pastor Johnson," arising from his ministries nurturing the flock, the members of the churches he faithfully led over the decades. His latter service was primarily comprised of interim ministries to a number of churches in Iowa, S. Dakota, Illinois, and Kansas.

His wife Eleanor, the mother of his five children passed away in 2002 in Richland, WA. Lester married a new-found loving companion, Diane Bolin in Pasco, WA on Mother's Day, 2011. The two of them found great joy in their brief marriage, still serving the Lord and caring for the needs of their family, friends, and one-another.

The family is profoundly grateful for the faithful attentiveness provided by the Hospice caregivers and most particularly for the loving and constant care provided by Diane in Dad's final days. Lester's remains will join those of Eleanor when interred with military honors at the hallowed grounds of Arlington National Cemetery, Arlington, VA