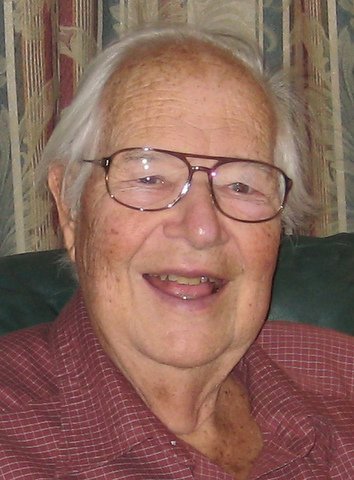 From Richland, WA, Us | Born in Long Beach, CA

Frederick Paul Brauer passed away peacefully at the Hospice House on Friday April 4, 2014. He was born February 3, 1929 to Pauline and Frederick August Brauer in Long Beach, CA. His mother died after a long illness during his childhood. She would have been extremely proud of her son and the man he became. Dad was knowledgeable about many things and was our "walking encyclopedia" before the internet. Dad was generous with his time, money and talents. He was dependable, selfless, hardworking, honest and never criticized others. He knew he did the best he could in life and assumed others were doing the same with their life. Fred was a man of faith and science. In addition to his Lutheran schooling he had an early interest in physics and chemistry. He considered himself a "lucky man" to have found a career in nuclear science, the field he was passionate about. Fred was proud of his UC Berkeley education and to have studied with some great minds of his time.

Fred met Kay, the love of his life, at the University Lutheran Chapel in Berkeley and they were married there on January 27, 1951. Immediately after graduation they left California and moved to Richland Washington to work for General Electric on the Hanford Reservation. Dad was employed by G.E. until 1965 and then employed by Battelle Northwest from 1965 until his retirement in 1994. He was a Senior Nuclear Research Scientist for the majority of his career. He continued to work part-time for Battelle until 1999. Fred and Kay celebrated their 63rd wedding anniversary this past January.

During his retirement years Fred became a Master Gardener and happily cared for his backyard of flowering plants. Fred was a member of the American Chemical Society, the Richland Kiwanis Club, Richland Lutheran Church, and was a docent at CHREST. He took great joy in his role as a docent as he loved to share his knowledge of Hanford with the museum guests. He had the ability to present information at their level of interest and understanding. Dad gave us many gifts throughout his life and one of the most memorable were the vacations he arranged for the family every summer. Our favorite vacations were camping at Ohanapecosh and the Olympic Peninsula, driving to California to visit relatives and the California sites and traveling to many of the western national parks. In Dad's later years he enjoyed frequent vacation trips to Hawaii. He would spend much of his time reading on the lanai with a view of the ocean.

Our lives will never be the same without you Dad. We promise to take good care of Mom and live by the high standards you lived in your life. Thank you for your gift of being our husband, dad, grandpa and friend. We love you.

A graveside inurnment service will be held at Sunset Memorial Gardens, 915 the By-Pass highway in Richland on Saturday April 12th at 3:00 in the afternoon. Following the service the Brauer family invites you to the home of Gina and Brad Begalka, 2005 Howell Ave. in Richland to share memories and honor Fred's life.

Our family gives thanks to the Hospice House and staff for their much needed support and care for Fred. We ask that donations be made to Hospice in memory of Fred.