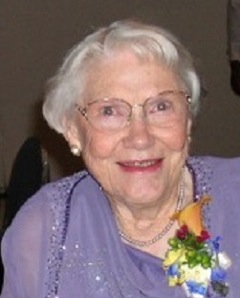 From Dalles, OR | Born in Yakima, WA

Pauline, or Polly as she was known to family and friends, was born September 21, 1923 to Pete and Bessie Smithwick in Yakima, Washington. Polly spent most of her youth in the Harrah and Wapato area.

After graduating in 1943 from Wapato High School she attended Griffin Business College in Seattle. It was during her time in Seattle that she met her future husband William G. “Bill” Westover.

Upon completion of her training, Polly returned to Wapato and was employed by the school district in a secretarial position until her marriage. Polly and Bill were married December 7, 1945 in Wapato. Bill accepted a job at Hanford and they moved to Richland, Washington before moving to Benton City in 1958 to raise their expanding family.

During her years in Benton City, Polly was very active in the Saint Francis Xavier Cabrini Catholic Church. She was familiar to many in Benton City as the town Librarian for over 20 years. Polly was also a gifted artist and an avid reader. After retirement, Polly and Bill purchased an RV and traveled extensively.

Bill and Polly were married for 52 years until Bill’s death in 1998. In 2002 Polly moved to Flagstone Senior Living in The Dalles, Oregon to be near family.

Polly’s greatest joy was her family and she loved family gatherings; first with her children, and later with her grandchildren and great-grandchildren. She was happiest with a child on her lap or just sitting and watching children play.

Services will be held at Events at Sunset, Richland WA, Saturday, November 7th with Viewing at 1:00pm, Rosary at 1:30, Mass of Christian Burial at 2:00 followed by internment at Sunset Gardens and celebration of life.