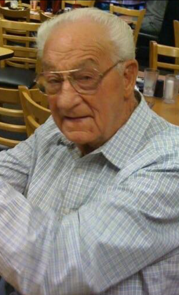 Clifford G Dykeman passed away at the Richland Rehabilitation Center on February 24th 2016 surrounded by his loving family.  He was born on September 29th 1924 in the small town of Kenesaw Nebraska to Oscar Dykeman and Alma Mavis Dykeman.

Clifford graduated from Kenesaw high school in 1942. He worked at the ammunition depot in Hastings Nebraska until he enlisted in the US Air Force in 1943. On December 3rd 1943 he married his high school sweetheart Jannett Krueger on his first furlough home.  He was transferred to the US Army at Blytheville Arkansas where Jannett joined him before being transferred to Paris Texas and from there he was sent overseas to serve in France.  In 1945 he returned to the United States and was scheduled to go to war in the Pacific area. That trip was cancelled when the war with Japan suddenly ended.Cliff was honorably discharged from the Army in 1946.  He returned Home to Kenesaw and was employed at the gas station.  In the summer months he joined a wheat harvest crew and harvested wheat from Texas to North Dakota. In August of 1947 Cliff and Jannett headed to Richland Washington to find work at the Hanford plant.  On March 2nd 1948 their only daughter Pamela Gail was born.   Cliff became a carpenter apprentice working on dams and any miscellaneous jobs.   On April 6th 1950 their only son Randy Greg was born. Cliff finally found a job he really loved, when he went to work for Bud Dazey building and remodeling houses. Cliff with Bud’s help built Jannett a beautiful home on Thayer drive.  He remained working for Bud Dazey until he retired.

Cliff joined the VFW Post #7952 in Richland in 1970 and loved it so much he became dedicated to their service and managed the club for a while, before becoming the commander of the Richland VFW honor guard where he served well over 1000 funerals and other patriotic functions.  He also served as Washington state chaplain for a year with extensive traveling over the whole state, He also received two national chief of staff awards and hosted two state conventions in Richland.

Cliff was preceded in death by his parents Oscar and Alma Dykeman, and brothers Arthur and Norval.

The whole family will surely miss you, but know where you are and that you are at peace. We know that you will be watching over us until we see you again, welcoming us to our heavenly home.