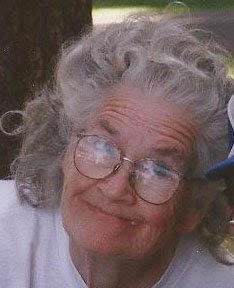 Velma Romine, 89, of West Richland, passed away July 7, 2018 at home of natural causes. She was surrounded by her loving family.

Velma was born to Arthur and Effie (Pugh) Jones on September 5, 1928 in Dighton, (Lane County) Kansas. She was the fifth of nine children. Her family traveled from Kansas to Gobel, Oregon in a Model “T” pickup in the early 1930s. They camped along the way, and drove on the old highway through the Columbia Gorge.

She graduated from Scappoose High School in 1948. Shortly after, the family moved to the Tri-Cities, where she met and married her future husband, Burvil Romine. They were married 54 years when he passed away in 2002.

She and her husband lived in Richland for several years, and then built a home in West Richland, where she lived 62 years. She and her husband raised three children. They also held a deep interest in the neighborhood children, giving support, advice, and an occasional candy bar from their vending business. Velma was known for good heartedly loading up her station wagon to drive a group kids, often silly, giggling girls to the movies, or the roller rink in Kennewick so we could skate and stay for the dance.  She had a giving, loving heart.

She was a member of the Church of Christ in Richland for most of her adult life. Her love for Christ was her driving force. Velma was a stay-at-home wife and mother for many years, and after the children were grown, she worked in the QA area at a potato processing plant in Pasco, and she and her husband operated a vending machine business. In her retirement, she wrote and published a children’s book, “Ike the Obstinate Bear.”