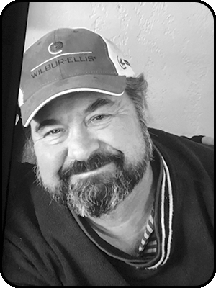 Jack C. Sabin, Jr. was born to Jack and Evalyn Sabin in Yakima, WA, on December 5, 1958. He passed away unexpectedly due to complications of diabetes on July 24, 2018. Jack's first years were spent in Yakima until his father's work with Kaiser International relocated the family to Venezuela. During the 6 years they were there, Jack attended elementary school. When they returned, his family settled in Kennewick. Jack attended Bethlehem Lutheran and Kennewick High School, graduating in 1977.

During high school, he was a charter member of the No Wimp Fearsome Foursome, a group of lifelong friends who have continued to gather annually. Jack affectionately called it his 12-step program for Wimps. Jack graduated from WSU, where he discovered his passion for marketing and public relations. He was a member of Delta Upsilon and also a houseboy for Chi Omega. Jack was a diehard Cougar and made many lifelong friends through his Greek life at WSU.

Following graduation, Jack moved to Seattle and worked for several employers including the Better Business Bureau, Impact Strategies and Wizards of the Coast/Hasbro. He also started his own Public Relations/MarCom firm in 1991.He was currently working for NASDA (National Association of State Departments of Agriculture) and AgroFresh. Both jobs required working closely with many people and great attention to detail. Jack enjoyed helping to produce safe foods from our region very much and will be sorely missed.

During his childhood, Jack relished spending summer days with his grandparents and cousins. He liked being outdoors and played tennis as often as possible. As an adult, he found great joy and purpose organizing and volunteering at Camp Goodtimes, a camp for kids with cancer. Jack was a friend to all and stranger to none, and his kind heart and smile will be missed by all.

Jack was preceded in death by his mother, Evalyn and his grandparents. He is survived by his father, Jack C. Sabin Sr., and step-mother, Dilara; sister, Shelby (Khris) Norwood; step-brother Paul Sabin; nephew Tyler Norwood and niece Tawny Norwood; along with many dear friends and relatives.

A celebration of Jack's life will be held on Saturday, August 18, at 10am ~ Einan's at Sunset in Richland, WA. Memorial donations may be sent in Jack's honor to The Goodtimes Project, 7400 Sandpoint Way NE #101 S, Seattle, WA 98115 or be made online at www.thegoodtimesproject.org.