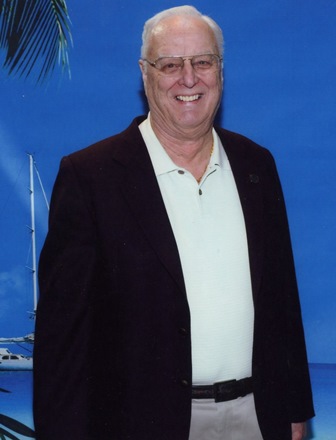 John Buchanan Schuette, 80 of Richland, WA passed away quietly on August 13, 2018 at home; he was born September 21, 1937 in Moscow, ID to Dr. Sylvester and Lorna Schuette.  He grew up in Moscow, ID and graduated from the University of Idaho.

John graduated from Moscow High School and from there enlisted in the USMC and served two years during the Korean conflict.  John was a competitive athlete and always pushed himself to do his best.  While in the USMC he played for the military basketball team as the starting center.  After the Marine Corp he was not quite ready for college, so he figured the next best thing was to be a logger in northern ID.  This was an extremely dangerous occupation and he soon realized he may want to strongly re-consider college.  He had attempted college twice before, but like many of us he had not been ready to buckle down as they say.  While being a logger, John met Patricia Kelly.  After 9 months, they married on August 20, 1960.

John now had the issue of college, the school of engineering voted to let him back into the school, but he could receive no grade less than a B or back to the logging camp.  John graduated with a BSME from the University of Idaho in 1964 and obtained his PE license in WA.

His first job after college was for ITT Rainer in Hoquiam, WA.  After a couple years he was ready for bigger challenges.  He and his family moved to the Richland, WA in 1967 as he started work for Westinghouse as a Project Engineer.  In 1971 he transferred to Battelle NW and remained there for 31 years until he retired in 2002.  While at Battelle he held many positions including Manger of Engineering.

John loved to cook and travel.  His cheese cake is arguably the best this side of Chicago.  He cooked every thanksgiving and Christmas dinner since 1961.  He also started a tradition of cooking dinner on Fridays, however this quickly transformed into taking Patricia out every Friday.  John has been traveling on cruises since 1985, at last count he had been on 39 different trips.  John took great pride in knowing his three children, himself, and his wife were all graduates from the University of Idaho.  He was on the University alumni board for several years.  He also served on the United Way board in Tri Cities for many years.

John spent many a Wednesday bowling in the technical league for the Town Crier.  He carried a 196 average for many years and was approached many times to turn professional.  In fact, he bowled a 300 game during one of the matches.

He was preceded in death by his wife Patricia and his father and mother, Sylvester and Lorna Schuette.

Services will be held Monday, August 20, 2018 at 11 00 a.m. at the Event Center at Einan's in Richland, Washington.  The family would like to invite you for a reception at John's home following the graveside services. In lieu of flowers, donations can be made to the Wounded Warrior Project at woundedwarriorproject.org