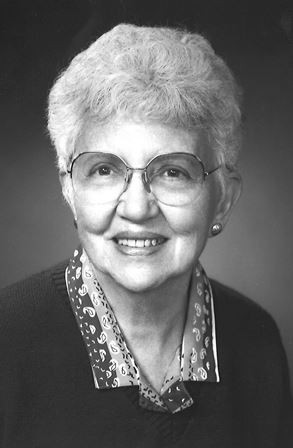 In loving memory, we observe the passing of Helen Cannon Madsen, born in St. George, Utah, March 16, 1922. Helen, 96, passed away peacefully at Guardian Angel Homes in Richland, WA on September 22, 2018. Her death followed an almost 10-year battle with the effects of a debilitating stroke.  Coming from a strong Latter-day Saint heritage, she was born of goodly parents, Raymond and Elizabeth Truman Cannon. Helen was one of five daughters and one son and was raised in a most loving home surrounded by her many siblings, parents, grandparents and many aunts, uncles and numerous cousins. She was attracted to the piano that resided in their small living room, and at a young age, was given her first piano lesson. It was said of her that after a short time at the keyboard, she was soon able to master basic skills to the point where she needed a more advanced tutor. With that not being a possibility due to limited family means, she became self-taught in piano, which became a great love in her life. Helen met her eternal companion, Anthon William Madsen, while he was working as an apprentice carpenter in St. George, UT. On December 22, 1941, in the St. George Utah Temple of the Church of Jesus Christ of Latter-day Saints, they sealed their marriage for time and all eternity. Anthon (Tony) and Helen soon left for Salt Lake City where Tony found work with Remington Arms in support of the war effort. They left Salt Lake City in 1943 for a temporary work assignment at the Hanford Manhattan Project in Richland, WA. Little did they know at the time, Richland would become their permanent home where they would raise their daughter, Antoinette, and two sons, William “Kent” and Howard. Her thirst for education in music was strong, and it eventually led her to obtain an AA degree in music from Whitman College in Walla Walla, WA. She was also one of the original members of the Tri-Cities Chapter of Washington State Music Teachers Association, formed in 1953. Her real love, however, was for teaching piano, which she pursued for over 35 years. Quite literally, hundreds of students were the recipients of her love for music. It was her deep belief that no child was too young to learn to appreciate music. Tony always supported Helen and her musical interests. He built a lovely studio onto their home, where she taught and held many piano recitals. In addition to piano, she excelled in organ. Helen served as a stake and ward organist in the LDS Church for many years. On June 21, 2009, Helen received the Washington State Music Teachers Hall of Fame Award. While music was a big part of her life, Helen was also an excellent cook and was famous for a wide variety of family favorite meals and desserts. She could whip up a delicious meal with a tasty dessert in a matter of minutes. Music and cooking were only a few of her many talents though. Mastering the art of needlepoint, quilting, crocheting, and embroidering, Helen shared her handiwork generously. Her grandchildren and some great-grandchildren received quilts of the finest quality. Helen exemplified the art of homemaking, and her home reflected the love she had for that art; it was fine in every way. Her greatest joy was to welcome people from all parts of the world into her home, where they always felt her love for them and for life itself. Helen was preceded in death by her husband Tony, on April 20, 2009, as well as most of her siblings. She has one surviving sister, Muriel Mathis, of Monroe, UT. She is also survived by her children: Antoinette Stewart (husband Gary Stewart-deceased), William Kent Madsen (wife Kathleen M. Madsen), and Howard Anthon Madsen, all living in Richland, WA. Helen has seven grandchildren, Angela Lytal of Oceanside, CA; Jason (Karen) Madsen of Kennewick, WA; Sara (Jeremy) Beckstead of Kennewick, WA; Paul (Chante) Madsen of Richland, WA; Jamin Madsen of Park City, UT; Josh (Alysa) Madsen of Riverton, UT; and Suzzanne (Jason) Dockendorf of Austin, TX; as well as 17 great-grandchildren.

The family would like to thank the many caring staff members at Guardian Angel Homes who loved and attended Helen for almost 9 years.

Funeral services will be held in the Church of Jesus Christ of Latter-day Saints at 1720 Thayer Drive, Richland, WA 99354 on October 5th at 2:00PM. A public Viewing will be held Thursday evening, October 4th from 6:30PM until 8:00PM at Einan’s Funeral Home, 915 Bypass Highway, Richland, WA.  Burial will follow at Resthaven Cemetery in Richland, WA.