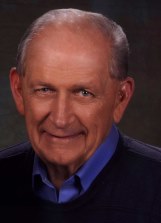 Roy J. Blanchard went home to be with his Lord and Savior on September 13, 2018 after an extended battle with cancer.

Roy was born in Denver, Colorado to Roy and Mary Blanchard on July 8, 1938.  He attended Jordan High School in Long Beach, CA, where he excelled in football.  He attended West Coast University in Orange, CA and received degrees in Mechanical Engineering and Electrical Engineering.  He was also an instructor for The Dale Carnegie Course.

He married Geraldine Grieve and they had 3 children:   Michael (Julie), Donald (Michelle) and Christine Paine (Tony).   That marriage ended in divorce.

He began his career with North American Aviation Incorporated in 1956.  He had many advances over the years and ended his career as Manager of Remote Systems Engineering- Technical Management and Special Equipment at Hanford in Richland, Washington

After accepting the Lord as his Savior, Roy became an active member of South Hills Church in Kennewick, Washington

Roy had many hobbies. He loved steelhead fishing with his friend, Bob.  He was also excellent at woodworking and made many gifts for the kids and grandkids.  He took great pride in his yard and garden.  He also loved to read.  He discovered Amazon and continually surprised the kids and grandkids with unexpected gifts.

Our family would like to thank Jennie, Dawn, Maria, Julia, Anita, Amber, Randy and Julie from the Caring Hearts Agency for their loving, compassionate care of Roy in his final days.  We would also like to thank the Tri City Chaplaincy for their home Hospice Care.

A Memorial Service will be held Friday, September 21, 2018 at South Hills Church in Kennewick, Washington at 11:00 a.m.