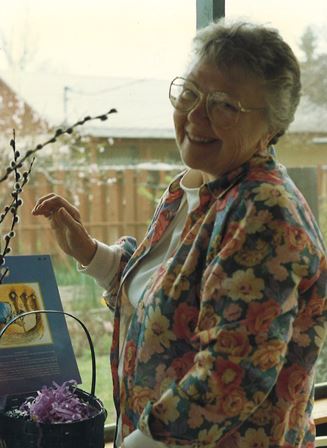 Janice L. Hice Chamberlain was born in Fort Dodge, Iowa on May 21, 1924 to parents Hollie Knowles and Anna A. Reaman Hice, and passed away on October 7, 2018 in Richland, Washington. Jan’s childhood memories included her mother feeding needy people over the back gate of their little bungalow during the Great Depression, visiting extended family at nearby farms, and going on family fishing trips to Michigan and Minnesota. One of her favorite remembrances was of riding in the cupola of an Illinois Central caboose with her beloved older sister Phyllis, at the end of a freight train for which their father was the conductor. After high school, Jan moved to Chicago in 1942 to train and work as an x-ray technician at the Illinois Central Hospital and thereby became the third generation in her family to work for the same railroad, the “Main Line of Mid-America.”

In 1948, she adventurously responded “yes” to a General Electric recruiter who was looking for medical professionals to move to Richland and work for the hospital. Jan arrived at the depot in Pasco during the infamous flood of May 1948, and moved into the dormitory accommodation which was typical of that post-war era. The next day, she joined a new-employee tour led by William W. Chamberlain. The tour was presumably informative, but she also appreciated the guide asking her out to dinner. She and Bill were married on January 29, 1950 in the original Army-constructed building of Central United Protestant Church.

Three daughters later, she returned to x-ray tech work at the Richland Clinic, from which she retired after many years of helping patients. She cherished the life-long friends made there, and created a standing tradition of lunches with them and others.

The Kadlec Hospital Auxiliary claimed the largest portion of Jan’s volunteer life, with over 14,000 hours devoted to their many projects, including working in the gift shop. She was also a frequent “room mother” at Marcus Whitman Elementary and helped at PTA carnivals (always relieved when a daughter’s class was not assigned the cotton candy machine). She faithfully served as troop Girl Scout Cookie Sale Chair once for each daughter – she too had been a Scout.

Jan was a constant and impressive crossword puzzle solver, and loved other word games like Scrabble, for which she retained the ability to achieve extremely high scores even at a very advanced age. She relished many hours over the years playing cards with friends, loved traveling with husband and friends, especially to the Oregon Coast, and enjoyed numerous antiquing trips with her sister. For decades, she and friends had season tickets to all the local performance offerings, and there were countless cheerful group dinners beforehand. She also enjoyed needlework and other crafts, spending time with her very special Kitty, reading, gardening, and cooking – eventually amassing a giant binder of recipes.

A long-time member of and volunteer at Central, she was particularly an enthusiast of the musical offerings, and a founding donor for the handbell program. In every possible way, she supported the many trips and performances of the youth singing choirs and the youth bell ensemble, the Charles Wesley Ringers, and played bells herself.

Jan was an excellent and loving mother, of the sort who welcomed your friends, made delicious birthday cakes, taught you to sew, planned family vacations, and made sure you had all your school supplies. She also marched small daughters to neighbors’ houses to offer apologies for picking their flowers or similar infractions. Her grandchildren received the same whole-hearted, embracing love, but amazingly, they needed none of the discipline.

The family expresses its gratitude to the caring staffs of Chaplaincy Hospice Care and Riverton Bonaventure Senior Living, and staff and volunteers of Central.

Jan continued to make friends and was always a good friend throughout her sweet, generous life.

Among her many kindnesses was a prolific habit of sending greeting cards. In her memory, the family suggests that you send a card to a friend for no particular reason. Memorials to Kadlec Foundation, Richland Library Foundation, or Prevent Homeless Pets. A Celebration of Life will be held at Central Church, 1124 Stevens Dr., Richland ,on Friday, October 19 at 11 am, followed by a reception at the church.