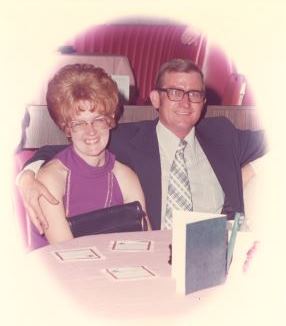 Sandy was a lifelong Tri-Cities resident and was born at the first Kadlec Hospital. Her parents arrived in Richland on 1943 to work on the Hanford Project; until August of 1945 they had no idea they were contributing to the Atomic Bombs being built. Babies born during this period were never on a national registry for fear the Germans and Japanese would estimate the population by birth rate.

She would graduate from Columbia High School Class of “63” and forever be “Proud of the Cloud” and being a “Col-High Bomber.”

Sandy adored her father and brother George. The family enjoyed vacations on Wallowa Lake, fishing and camping. She would ride a train to Belton, MO every summer to see her sister Peggy and brother-in-law George Jenkins. She would learn the art of hairdressing with their favorite Aunt Judy and Peggy inspiring four generations of hair styling with her daughters and granddaughters.

Sandy attended Richland Beauty School graduating in 1964. She began her 52 year career at LaVernes Beauty Salon and after 32 years opened Hairlines in her home.

Sandy married Lawrence Wersen on August 8, 1964. To this union Dana Lyn was born on August 7, 1965. She then married Thomas McVeigh on August 22, 1970 at the Dayton Court house. Their honeymoon was at the drive in on the edge of town to watch Butch Cassidy and the Sundance Kid. To this union a daughter was born, Jennifer Nico on April 15, 1972. She would also welcome Thomas’ children into her family with Kurt, William and Carrie joining them.

Sandy and Thomas enjoyed 47 years of marriage on their farm in Finley.  They loved the outdoors and traveling was their passion. They loved fishing local rivers and salmon fishing on the Washington Coast. They went to Las Vegas and Maui every year and she had some serious poker playing skills. They loved their Friday night dinners often followed by pinochle with friends.

Mom will be missed for her amazing cooking and hospitality. She never let her children and grandchildren forget they were loved; always patient, teaching us in her quiet subtle ways, how to be a good person by her example. She didn’t say a lot but her actions spoke volumes.

Our family would like to thank Sue Golladay, Casie Douglas and her granddaughter Heather for always being there for mom. Your love, friendship and companionship were more than we could ask for. Thank you to Fieldstone Memory Care for their compassionate care this last month during a difficult time.

Sandy was preceded in death by her parents; brother, George, her grandson, AJ, and her husband Thomas.

Please join us in Celebrating Sandy’s life on Saturday, November 10, 2018 at 1:00pm at Einan’s at Sunset, 915 ByPass Hwy in Richland, followed by a meal and reception.

In lieu of flowers please donate to Parkinson’s Research of your choice.