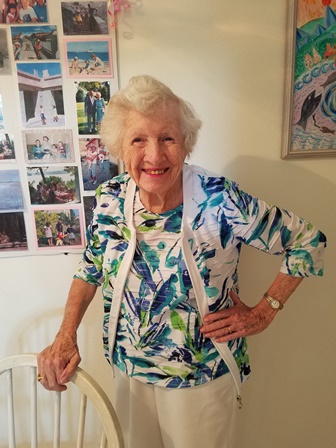 Shirley June (Fork) Sargent, 92, passed away peacefully on Thursday, November 22, 2018 at Callaway Gardens located in Kennewick, WA. She was born on March 07, 1926 as the first child of Miriam and John Fork in Reading, PA, but grew up in Wyomissing, PA about five miles to the west. She grew up with her younger sister, Gloria, during the Depression. She would help make sandwiches for those that came to the door asking for help and this experience helped shape Shirley’s humanist view of the world.

Shirley was an excellent student and a member of the National Honor Society. She graduated from Wyomissing High School and later attended the University of Wisconsin majoring in language. She was fluent in Spanish and conversational in French. She worked as a cashier at the campus cafeteria and that is where she met the love of her life, Fred Sargent. Once they married in 1947, their travel adventure began. Fred used his GI Bill benefits to attend the Sorbonne in Paris. Their first son, Blaine, was born there. Later, they moved to Germany as part of the Marshall Plan and their second son Wendell was born there. They returned to the United States and took a car and trailer from Maine to Oregon to see all the sights and many relatives. Fred took a job as a professor in Colorado and then Texas A&M. While in Texas, their daughter, Bettina, was born. Eventually, they settled in Vermont where Fred accepted a job as a professor at the University of Vermont (UVM).

Shirley took care of the children and handled all the home finances and maintenance issues. She encouraged her children to be active and took them to downhill ski in Vermont and to their various club meetings and sporting events. While living in South Burlington, Vermont, Shirley and her family enjoyed activities on Lake Champlain such as sailing, canoeing, swimming, ice skating and ice sailing in the winter. Shirley was an avid hiker and led the Women of UVM hiking group for many years with treks in New York, Vermont, and New Hampshire. She was an expert on Vermont wild flower identification and enjoyed birding. Shirley was also an enthusiastic vegetable gardener and loved flowers, especially roses. She and Fred stayed in shape by practicing Scottish Dancing and Folk Dancing, bicycling, and canoeing. Vacations were spent camping in Cape Cod at the Audubon campground, and camping and canoeing in Canada and Florida and many places in between. Shirley made many, many friends throughout her life and kept in touch for many, many years.

After retirement, Fred and Shirley continued to travel. They frequented Elder hostels where experts and professors lectured on interesting topics, returned to France to visit old friends and kept at old hobbies such as canoeing and bird watching. In Florida, Shirley continued her love of gardening with roses and flowers and helped Fred lead canoe trips on Florida Rivers for their many friends.