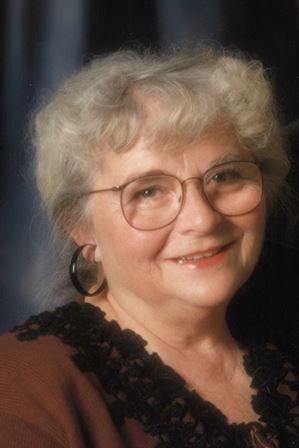 Phyllis Bowersock died peacefully at Hospice on Jan. 17, 2019 from complications of Alzheimer’s surrounded by her two daughters.  You might remember Phyllis as someone who registered you to vote, handed you a ballot at the polls, or held picket signs for peace, equality or economic justice.   Maybe she was your 4th grade teacher, Campfire leader, or she sold you a book at the Book Place, entertained you in a Richland Players play or took your reservations for Players tickets.  You might be thankful for her service to community and country, volunteering for Richland city boards, Chamber of Commerce, the Richland library, and PTA.  Or perhaps you are just one of the people close to her that have a hole in their hearts and another empty seat at their gatherings.

Phyllis Ann Clegg was born March 17, 1929 in Burlington, Kansas, a St Patrick's Day baby who brought the luck of the Irish to her parents Roy and Gladys Clegg and older sister, Helen Clegg Peterson.  In high school her family moved to Columbus Kansas where she literally met the boy-next-door, Robert “Bob” Bowersock, another lucky occurrence as they remained together for 65 years.  Both attended the University of Kansas.  Phyllis majored in Speech Education and minored in Performing Arts graduating in 1951.  She and Bob married on August 2, 1952 and they honeymooned on their road trip to Long Beach California, where he completed his Navy service.  The couple moved to Richland in 1953 and Phyllis began a teaching career at John Ball and later Marcus Whitman Elementary schools.

Once she left teaching to raise her two daughters, she began a life of service including at school as a Room Mother and in PTA, and in the community, serving on the Richland Citizen's Tax Committee, The Benton County Democratic Women's Club (President),  as a Democratic State Committee Woman, on the City of Richland Board of Ethics (Chairman), and  with the League of Women voters, to name but a few.  A devoted member of the Democratic Party, she worked tirelessly for candidates running for local, state, and national office, boycotted, protested, raised money, volunteered at campaign headquarters, worked the election polls, and walked precincts.

In 1974, lamenting that Richland had no book store, she and Muriel Templeton, Anne Wallace, Sylvia Kipp, and long time best friend Shirley Miller opened The Book Place in Uptown Richland, where she would inspire readers for 23 years before retiring from the business in 1997.

Phyllis was a passionate supporter of not only the literary arts, but all arts –participating in community theater, most notably the Richland Players, where  was involved in dozens of plays as actor, producer and board member. She served as the Player's president from 1984 – 86 and again from 2007 -2009, spearheading the theater's lobby remodel in 2007  and receiving  the Player's Service award for 25 years of service.  She and Players associate Jo Brodzinski started their own dinner theater company, The Company, in 1984.

Later in life, Phyllis put her years of book selling expertise to work once again at the Richland Public library as a volunteer in the Book Room and as a Board member.

Phyllis made a mean huckleberry pie, sewed clothes for herself and her girls, knit and crocheted plenty of afghans, and enjoyed traveling.  She particularly loved going to their cabin in the Gorge, the Oregon coast along with seeing plays in Ashland, and to visit family and friends wherever they lived.

Throughout her life she made and maintained friendships with people she had met in kindergarten, high school, college, and 65 years living in Richland.

She was predeceased by husband Bob in 2015, and life-long friends Norm (2012) and Shirley (2018) Miller along with her sister Helen and many other dear friends, neighbors, and pets.

She is survived by her two daughters; Kim Guyette (Joe) and Karin Bowersock (Jim Ritter), granddaughter Caitlin Guyette as well as step-grandchildren Chris, Tim, Rebecca and Sophie Ritter, plus nieces and nephews around the country.

Phyllis leaves a legacy of a lifetime dedicated to family, friends, education, the arts, politics and social justice, and serving the community she loved.  We hope you will think of her when you open a book, cast a vote, enjoy a play, speak up for those in need, or order an egg salad sandwich at the Spudnut Shop.  It’s hard to forget someone who gave us so much to remember.  In lieu of flowers please, PLEASE donate in her name to a worthy cause such as The Chaplaincy/Hospice of Tri-cities, Pet Over Population Prevention (POPP Tri-Cities), a political campaign or theater group.  The family invites you to join them for a celebration of her life on Saturday, May 11th at 11:00 a.m. in Sunset Garden’s Event Center, Richland.