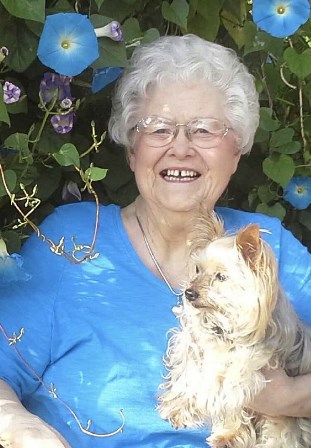 When she was 16 years old she met her future husband, John Monroe Goff, Jr., at the swimming pool.  They were married on May 27, 1949, and moved to Austin, Texas, while John completed his studies at the University of Texas.  In 1951 they moved to the Tri-Cities, Washington, where they raised their six children.

Elizabeth was a devoted wife, mother, grandmother, and great grandmother.  She enjoyed sewing, cooking, crafts, gardening, and collecting all things “apple”.  She really enjoyed creating special birthday cakes and costumes for Halloween and other special occasions for her children. She loved making the holidays extra special for her grandchildren and great grandchildren.  During the 1970’s she went into business selling custom draperies.

As a young child Elizabeth accepted the Lord Jesus Christ as her Savior.  She joined the First Baptist Church, Richland, in 1965 and became active with various children’s ministries (Joy Club, Jet Cadets, and Junior Astronauts).

There will be a Memorial/Celebration of Life at First Baptist Church of Richland, 1107 Wright Avenue, on Saturday March 16, 2019 at 3:30 pm, preceded by a graveside service at Sunset Memorial Gardens at 2:00 pm.

In lieu of flowers, donations may be made to Tri-City Union Gospel Mission.