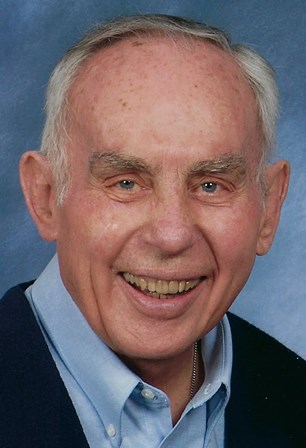 On March 22, 2019, a perfect spring day for a brisk sail, Tom died peacefully in his home in Richland, surrounded by family.

Born in Salt Lake City in 1924, he was the only child of Florence and Lorin Golding. Always fascinated with discovering how things work, he designed and built remote controlled model airplanes from a young age, explored the outdoors, and helped his dad build their family home.

Tom left the University of Utah in 1942 to serve in the Navy where he worked in gunfire control on ships in both the Pacific and Atlantic until he was selected for Officer Training School. When the war ended, he returned to Utah to complete his degree in mechanical engineering with his sights on a career in the aviation industry.

Tom raised two children, Kent and Karen, with his first wife Frances Dotzour, who died in 1977. During those years he continued to build and fly models, flew light airplanes, and developed a passion for sailing. He was one of the founders of the Columbia Basin Sailing Club in 1972 and won many trophies during his racing years.

His career encompassed many projects from aircraft design to developing remote operating equipment, development and testing of radioisotope heat sources, and finally program management in waste disposal and materials testing. Of note, the Lockheed F-104 Starfighter, a project Tom worked on, hangs in the Smithsonian National Air and Space Museum.

Single and with children grown, Tom cautiously dipped a toe in the dating pool. It didn’t take long before he met the love of his life, with whom he would live out the rest of his years, Elsie Drumheller Boyer. Initially keeping the romance low profile, a friend of Elsie’s mentioned that perhaps she should go out with Tom Golding, to which she replied “Actually, I’m going to marry him!” They were married on May 20, 1979, and embarked on family life with her three children, Lisa, John, and Kristin.

Tom retired from Battelle in 1986, opening time for him and Elsie to travel, which they enjoyed immensely. One of their favorite places, which beckoned them back a second time, was the Island of Rarotonga in the South Pacific’s Cook Islands. Snorkeling, exploring, and learning about the culture of the islanders made for the perfect getaway.

Throughout Tom’s 95 years, the way he told a story, turned a phrase, made us laugh and provided us with an ear, a shoulder, guidance, and love were unique and priceless. His healthy dose of cynicism kept us grounded and his clear-eyed way of analyzing situations helped make sense of things. His sharp wit, brilliant mind, and innate sense of true north resulted in a uniquely kind, compassionate, smart, and loving man whom we are so grateful to have graced our lives.

A service commemorating his life will be held at All Saints Episcopal Church on May 18 at 2:00 pm. In lieu of flowers, memorial contributions may be made to Chaplaincy Healthcare or the charity of your choice.