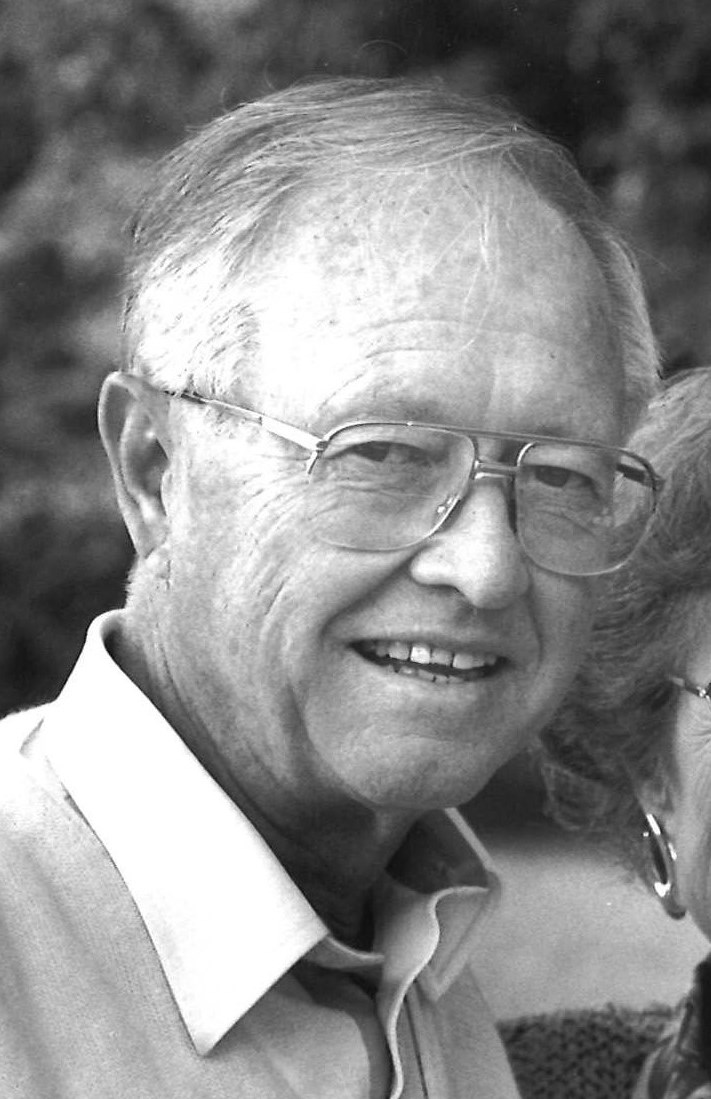 From Richland, WA | Born in Tillamook, OR

Gerald Richard “Dick” Hewett was born in Tillamook, Oregon on April 1, 1928 to Gerald and Viola Hewett.  There he was raised with younger sister Molly, where they enjoyed the company of nearby relatives including cousin Fred Brauti who was raised in Wheeler, Oregon.  His early years included a memorable fishing trip by railroad with cousin Fred and uncle Earl Brauti.  He returned from the burned forest of the coastal range with many fish but covered from head to toe in soot.

At about age 8 the family moved their pharmacy business to Lebanon, Oregon.  His years in Lebanon showed a continued love for outdoor activities including scouting and working as a forest fire lookout in the hills above town.  In scouting he attained the rank of Eagle Scout. Other activities included basketball at school and berry picking in the summer.  He was also an excellent student.

After graduating from Lebanon High School in 1946, Dick attended Oregon State University, where he met his bride-to-be, Fawn Brooks.  While engaged to Fawn, Dick went on to Dental School at Oregon Health Sciences University.  Also, he enlisted in the Army during this time.  Following graduation Dick returned from boot camp one day prior to his wedding to Fawn.  They were married in Portland on September 10, 1950 and then were sent to Letterman’s Army Hospital in San Francisco for dental residency.  In 1952 he was assigned to Camp Hanford near Richland, Washington.

During his time at Camp Hanford, son David Richard was born on September 30, 1953, followed by Paul Brian on July 14, 1955.  After honorable discharge from the Army, Dick set up a private practice for children’s dentistry in Richland.  Soon after daughter Sally Jean was born on October 31, 1957.  She would later follow in her father’s footsteps by becoming a dentist.

While raising a family in Richland, Dick participated in many community activities including fund raising for the construction of the YMCA pool.  He also became an astute investor; a skill he would use later in life to manage the portfolio for the cemetery fund.

Outdoor activities would also be a continued theme in his life.  He signed the family up as charter members of the then new Sham-Na-Pum Golf Course in Richland.  In the winter months ski trips to Spout Springs, Mission Ridge, Anthony Lake, and Big Mountain provided great enjoyment for the family.  Water skiing and picnics with family friends were a mainstay of the summer months. For Thanksgiving the family would travel to Lebanon, Oregon for wonderful times with his parents and sister Molly and her family.  A vacation in 1967 took the family to Washington DC.  As the kids left the nest, Dick and Fawn were able to travel abroad for many memorable vacations. Trips to Italy, Brazil, Japan, Singapore followed, but their favorite was to Africa.

During his years as a dentist Dick joined a dental study club with four other dentists.  As they shared expertise and grew in their careers, they became lifelong friends.  He also found time to pursue and obtain a private pilot’s license.  In later years, Dick attended the Masters Golf tournament three times.  After retirement he joined another group of friends who would meet every Tuesday morning at the Spudnut Shop.

Dick lived a very full life.  He loved the fact that he was born on April Fools Day and looked forward to it with delight.  He is survived by his wife Fawn, sister Molly Hopkins, children Dave (Mary Jo), Paul (Sandy), Sally (Dan Meyer), grandchildren Jonathan (Aubre), Alex (Allison), Julie, Jason, and Alisa.

In lieu of flowers, remembrances may be made to the Leukemia and Lymphoma Society, the Boy Scouts of America, or YMCA.  Services will be held at Sunset Memorial Gardens Event Center at 1:00 p.m. Saturday, April 13.  All those who knew him are welcome.