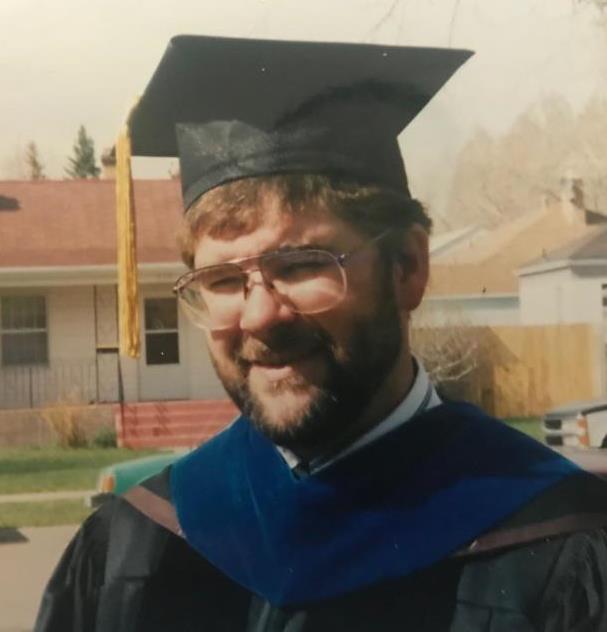 On Sunday, May 19th Jim Hansen, passed away at home surrounded by loving family.  Despite numerous serious illnesses and treatment therapies, he accomplished more than most could in 50 short years. He worked harder, played harder, hiked farther, stayed up later and finished more of everything. As his sister Julie describes, he faced his own mortality at an early age—this may have caused him to be all the more courageously committed to living his life well.

Jim was born in Sheridan, Wyoming to Arnold and Barbara Hansen. He attended Linden Elementary School and graduated from Sheridan High, Class ’86. He grew up in the outdoors; fishing, tracking, hiking, and hunting, as soon as he could walk. He had an affinity for the natural world which, like a river, would cut its course and shape the landscapes of his life and those around him. He shared many adventures with his family, his father Arnold, his older brother Mike, and younger sister, Julie. He spent summer days in Wyoming as a kid: swimming, biking, and eating ice cream to ease sun like all kids. The unique part of Kendrick Park in the middle of Sheridan was the presence of a small herd of elk and bison. Winters were spent sledding, skiing and snowmobiling. They camped and rode motorcycles going frequently up Red Grade Road to the Big Horns. His love and appreciation of wildlife showed through an extraordinary menagerie of pets - a racoon, a skunk, parrots, dogs and cats. Arnold and Barb taught each of their kids to be independent and resourceful, skills in the outdoors, and how to work with tools to make or do anything out of almost nothing. Jim earned the highest achievement of Eagle Scout in 1982 demonstrating his character and his commitment to perseverance, hard work, and service even before he began his first battle with Burkett’s lymphoma in 1983.

To say that Jim loved fish would be an understatement. He was literally a specialist in pacific salmonids, so it is fitting that his own life followed the life course of a salmon which begins inland in the habitat of sheltered mountain streams. He learned to fish from his father in Wyoming, probably on a trip to Lake DeSmet almost before he could walk. He studied the food, habitat and behavior of fish in the waterways of the Rocky Mountains and Pacific Northwest. It is a litany of the continent’s greatest rivers and fishing spots: Missouri, Bighorn, Powder, Tongue, Yellowstone, Madison, Gallatin, Jefferson, Clark Fork, Salmon, St. Joe, Coeur d’Alene, Priest, Kootenai, Snake, Columbia. He could be found crawling through streams at the headwaters of the Columbia in wet suit at night turning over rocks looking for invertebrates. He joked with Monica that the reason his hands were so warm is that he had spent so many hours with them in cold water that they had developed increased vasculature. He didn’t plan to be a scientist, initially, but began the work that would develop into his career working at a fish hatchery. His passion for fish carried him through successive degrees and research projects where he worked to understand the toxicity of heavy metals and other contaminants in river ecosystems. Jim earned a bachelor’s degree in wildlife conservation and management, master’s degree in zoology and physiology and a doctorate in zoology and physiology all from the University of Wyoming. He even did neurosurgery on fish to study the impact of contaminants on neurons in the olfactory system. He was in his glory when trying to understand complex, natural and technical systems: laser confocal microscopy, elaborate ecological research, running his jet boat through Hell’s Canyon.  Over his career his work contributed to clean-up efforts in more than nine superfund sites spanning the continent from the Hudson River in New York all the way to California.

Hunting and fishing were a great part of Jim’s life. Time was arranged by the seasons: hunting and fishing seasons, that is. He studied, hunted, tracked, and harvested deer, elk and bear. He was an avid and adept bowhunter in the century before cell phones and GPS who once split the shaft of his own arrow in the bullseye of a target while practicing. He taught his children how to handle firearms, but first and most importantly he taught safety. We all know we should wear ear and eye protection, but he absolutely required it.  He hunted across the mountains and plains of Wyoming, Colorado, Idaho and Washington. He loved to fly fish in the Big Horn Mountains, caught salmon and sturgeon on the Columbia River, and he followed the salmon to the Pacific Ocean fishing out of Ilwaco and Neah Bay with his good friends. It is known that he could smell salmon in the river, once driving over the Vernita bridge with the windows closed.

Jim was always working industriously on projects. As a young man, he sold skins, mowed lawns, worked at the fireworks stand, Carl’s IGA and the Story fish hatchery. Julie was proud as her brother guided her school tour through the hatchery; also embarrassed, that he smelled like fish. He would at times smell like fish for another 35+ years and loved every minute of it.  In Laramie, while in college, he found Monica with little to go on but her study carole number in the basement of the university library hidden by the stacks of government documents. They were married on August 7, 1993 in Curt Gowdy State Park overlooking Granite reservoir between Laramie and Cheyenne. Together they raised three children: Samantha, Alexandria and Jacob. There’s no achievement award for being a partner and parent but he would be awarded the highest honor there, too.

His work with fish continued through a work study at Red Butte’s, an aquatic ecology and toxicology laboratory outside of Laramie, Wyoming. Jim, always the craftsman, continued building, cabinets, tables and an amazing family. He tied his own flies and made custom jigs. A known master of coordination and organization, he was an unstoppable force and teacher, challenging but patient. He always had quick wit and that mischievous twinkle in his eye.

Prior to joining the DOE, Jim worked for the U.S. Fish and Wildlife Service, first as a resource contaminants specialist, before being named a supervisory fish and wildlife biologist in 2006. During his tenure, he supervised the Environmental Contaminants Division at the Spokane field office and was the senior technical contaminants specialist, providing technical advice to EPA, Forest Service, State of Washington Department of Ecology, DOE, and Department of the Interior decisions and Natural Resource Damage Assessments (NRDA).

A devoted supporter of wildlife and sport, he was a member of Ducks Unlimited, The Rocky Mountain Elk Foundation and Tri-Cities Shooting Association.  Dr. Jim was driven and lived enough life in his short life for three lifetimes. He wasted not a single day on this earth and wanted everyone to live their lives to the fullest, to watch the sunset, pick huckleberries and travel great landscapes. To quote from his sister Julie:

“You taught me so much about Mother Nature and her precious Earth. You love her with all your heart. Your work is a part of America’s history. Your work that only helped fix industrial wrongs. You are Dr. James Hansen and you have made a difference here and left your gentle footprint behind.” Julie McCarthy Hansen 2019

Dr. Jim Hansen will be remembered in a celebration of life at Einan’s at Sunset Garden in Richland, WA on May 28, 2019 at 7:30 pm at the Event Center with a reception to follow. The family will also share a memorial in Sheridan, Wyoming later this summer.