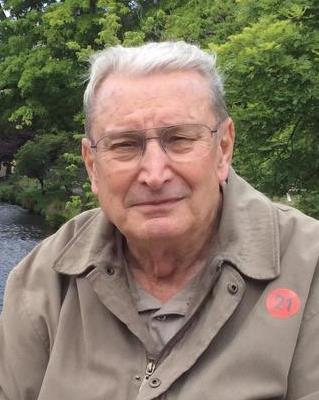 Richard Grant (Dick) Downard went to be with his Lord and Savior May 9, 2019.  He was the only child born to Raymond Neil and Berniece Agnes Downard on September 1, 1936. He was born in the same house where his mother was born in Burlington, Iowa. Dick grew up in northern Indiana and graduated from Calumet Township High School with the class of 1954. After graduation he joined the Navy. He rose to the rank of 2nd Class Petty Officer. He served as Radarman on the Ice Breaker USS Glacier, which sailed to Antarctica on Operation Deep Freeze II. Upon discharge from the Navy in 1957, he went to DeVry Tech in Chicago on the GI Bill. After completing the courses there, he was hired by Inland Steel in East Chicago, Indiana, as an apprentice electrician. He continued taking classes at Purdue University - Calumet Campus.

Dick met the love of his life, Gracie Ann Copper, on a blind date arranged by a classmate.  They were married on June 2, 1962, at Black Oak Baptist Church in Gary, Indiana.  God blessed them with three sons, Dave, Dan, and Dickie.

After 19 years with Inland Steel, the family moved to Washington state in 1978. Dick was hired by Westinghouse Hanford to work at the FFTF. He was an Electrical Maintenance Engineer when he took early retirement at the age of 59.  Aside from the fact Gracie cried upon arrival in Tri-Cities when she laid eyes on the barren landscape, eastern Washington grew on them and they remained even after retirement.

Dick served his Lord and Savior faithfully in local churches serving as Deacon, Sunday School teacher, and jokester for over 50 years. His hobbies included oil painting and golfing. He loved watching his boys play sports where he coached and refereed with vigor from the stands. He never missed a game and always took them to camps and tournaments.

A service celebrating his life will be held at Richland Baptist Church on Saturday May 18th at 2 pm.

Dick believed heaven is a real place and to spend eternity there you must believe in Jesus and that Jesus died to forgive you of your sins to make that possible.  See John 3:16.