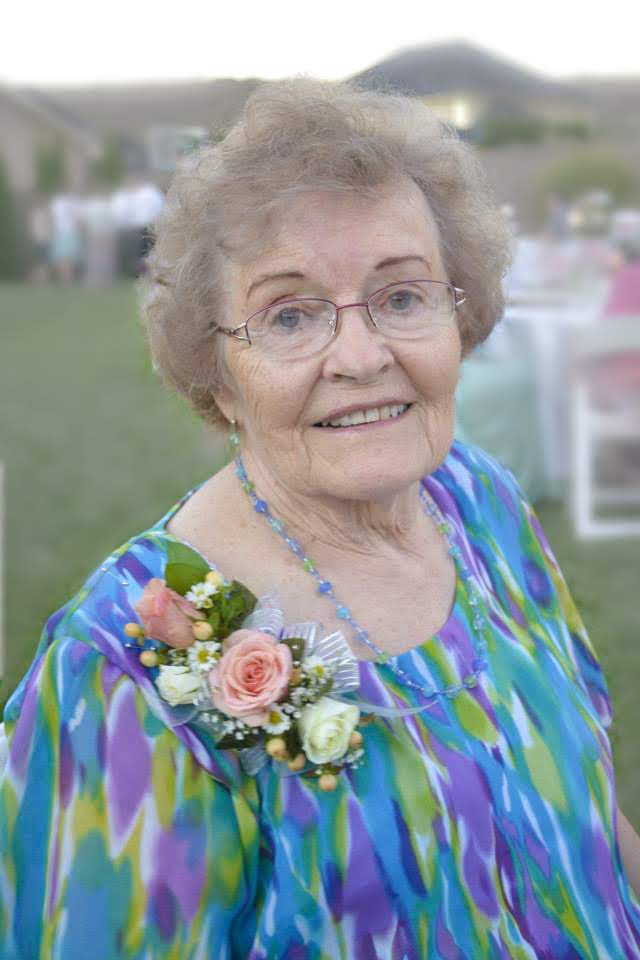 Valerie Nelson of Richland, Washington, passed away peacefully in her sleep at the Badger Mountain Adult Family Home in Richland, Washington.  Valerie was born March 28, 1930 in Salt Lake City, Utah, the third of four daughters of Kendloss Garnet Jacobsen and Katherine Annie Solomon.

She graduated from South High School in Salt Lake City where she enjoyed singing in concert choir and was a school officer.  She attended the University of Utah for a year after High School and then transferred to Brigham Young University.  It was there she met Jack Nelson through a roommate when she was 21.  They were married, after a long-distance courtship, in the Salt Lake Temple June 15, 1951.

They raised their four children in Richland in a house that she and Jack designed and built on Sunset Street with several other LDS families.  Jack and Valerie were married for 58 years until Jack passed away in 2009.

Her greatest joy in life was her family and especially her nine grandchildren.  She spent countless hours teaching and nurturing them.  She was happiest when she was with them and she loved them each dearly.

Valerie was primarily a homemaker throughout her life, taking great care of her husband and children.  She was a wonderful seamstress and made many of her daughter’s clothes and her own throughout her life.  Later she loved sewing for her grand-daughters.  Valerie also loved gardening.  She was a Master Gardener and a member of the Planterettes Garden Club for over 50 years in Richland.  She grew beautiful flowers, especially roses, and raised many of her own vegetables.

Valerie loved to sing throughout her life.  She sang in duets, trios and choirs and had a beautiful alto voice.

Another great love of Valerie’s was animals.  She always had at least a dog and a cat in her home and also had turtles, rats, mice, birds, rabbits, gerbils, hamsters, guinea pigs, fish and other animals throughout the years.  She loved them all and they loved her.

When Jack started his building business, Valerie began helping decorate the homes he built, choosing color schemes and fixtures for the them.  Later she helped decorate the hotels the company built.  She really enjoyed working as a decorator and did a wonderful job.

Valerie was an active member of the Church of Jesus Christ of Latter-Day Saints all of her life.  She served with love in many different callings in Relief Society, Primary and in the Extraction program.  Later in life Valerie and Jack served three full-time missions for the Church – in the mission office in Scottsdale, Arizona, in the Employment Center in Kennewick, Washington, and in the Real Estate Department of the church in Salt Lake City, Utah.  They also worked in the Seattle and Columbia River Temples for many years as ordinance workers.

Valerie and Jack also loved traveling.  They enjoyed many adventures together including trips to and England and Denmark where they researched their ancestors.

A special thanks to the staff of Badger Mountain Family Home for their wonderful care and love for Valerie.

Interment will be at Sunset Memorial Gardens.