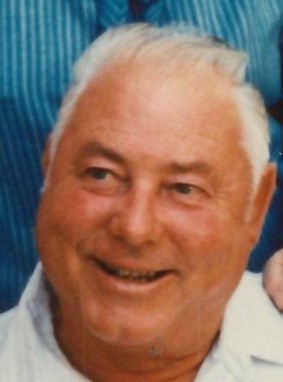 Arland S. “Arlie/Robbie” Robertson, 89, was called home to the Lord on July 20, 2019. He passed away in his sleep at his home in Burbank, WA after a long and brave fight with cancer. Arland was born to Selma and Albert Robertson on July 19, 1930 in Bottineau, ND. The family moved to Hanford, WA in 1943 where his father worked as a Power Operator on the Hanford Site. Arland and his two brothers attended school in Hanford until housing became available in Richland. At the age of 18 he enlisted in the Washington National Guard, 420th Antiaircraft Battalion, which trained at the Yakima Firing Range, and also joined Local 370 of the Operating Engineers. His prized possessions were his 1948 black Chevrolet Convertible and his 1948 red Harley Davidson.

On February 10, 1951 he married his high school sweetheart Betty Fruh, and soon was called to active military service in the U.S. Army. He was stationed at Fort Bliss, TX and later Fort Lewis, WA. Upon discharge from military service he returned to Local 370 and worked as a crane operator on many construction jobs in this area, including  Grand Coulee, McNary, Ice Harbor, Lower Monumental and Little Goose Dams; Missile Sites near Moses Lake; and 100-K Reactor, Plutonium Recycle Test Reactor and Fast Flux Test Facility at Hanford. He was one of the first crane operators to put Miss Tri-Cities and Miss Budweiser in the water at the hydroplane races. In 1982 he joined Local 280 and worked as a crane operator for Rockwell Hanford Operations and Westinghouse Hanford until retirement in 1992.

Arland was a member of the First Lutheran Church, American Legion, and Columbia Grange. He was a hardworking, honest, and good man with a great sense of humor who enjoyed life to the fullest. He always included his family in his many hobbies of camping, trap shooting, bird hunting with his black Labs, deer hunting, fishing for trout, steelhead and salmon, waterskiing, cutting firewood, snowmobiling at Spout Springs, family poker games, and trips to Reno. Arland, you are loved by your family more than words can express and we will have an empty space in our hearts forever, but we will always have wonderful memories of a very special man.

The family wishes to thank our neighbors and friends for their help and support, and the staffs of Home Care Solutions and Providence St. Mary Home Health for the special nursing care and comfort provided for Arland and his family during his illness.

Please give any memorial to the charity of your choice.