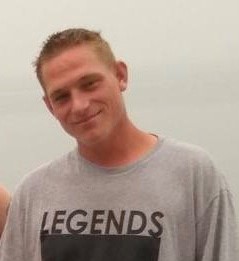 David Lee left our family on July 30, 2019. David was born in Kennewick, WA on August 25, 1989 and lived his entire life in the Tri-Cities. He grew into a very loving and strong, hardworking young man. He was a certified welder and was employed by Artistic Trees of Richland, WA. His family was extremely important to him. He loved to cook and could make something out of nothing. He was really good at a dish he called “train wreck.” He enjoyed large family functions, motorcycles and just a plain old “Good time” doing whatever.

David is survived by his daughters Kyilee, Avalynah and son, Avery; his fiancé- Marisa Fuentes and her children-Amelia, Marley, Ci Ci and Joe; mother and step-father Judie and Jim Shoemaker; Sisters-Mary (Rich) Wilkinson and Christina (Jason) Beck. Brothers-James (Cassandra) Braithwaite, Corey Inlow and Darrell Inlow; Grandparents Dennis and June Smurthwaite; plus Aunts, Uncles, and numerous cousins, nieces and nephews creating a large family as well as a world of friends, especially Treavor and Justin. He is missed more than he ever could know.