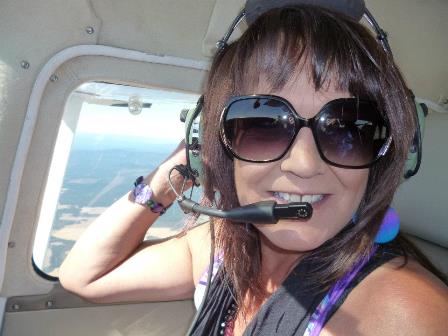 From West Richland, WA | Born in Astoria, OR

Born in Seaside, Suzie spent her early years and youth growing up in Hood River, Oregon. Early life for Suzie was filled with horseback riding. She won many awards on the back of “Kid” a quarter horse that she raised from birth. Horses and pugs were a big part of her life since childhood.

After graduating high school in 1978 she moved to the Tri-Cities along with her late husband Ray Gilkerson who started and owed Kennewick Aircraft Services at Vista Field until his death in 1994. Since 2005, together with her husband Clif, they owned and operated Sundance Aviation at the Richland Airport. Suzie became the face of the business and built friendships with every person she encountered throughout her career.

Suzie is survived by her husband of 19 years Clifton Dyer, her parents Richard and MaryAnn Kelly of Umatilla, Oregon, her sister Gayle Goin, her brother William Kelly, and was especially proud of the accomplishments of her niece and nephew, Ondrea Miller-Kelly and Heath Goin. Suzie was a haven for many pugs that she took in from rescue's and loved over the years, they became her beloved children. She is survived by her precious pugs Emmy and River and will always be known as a devoted animal advocate.

Her smile, laughter, and the twinkle in her eye will be missed dearly by friends and family alike who knew and loved her as a very gentle, kind, and loving spirit.

A Celebration of Life will be held in Suzie's honor at Sundance Aviation at the Richland Airport on Friday July 12th, 2019 at 6:45 PM. In lieu of flowers, a donation to the Seattle Pug Rescue can be made in Suzie's name to help care for all the pugs she would have taken in had she still been with us today.