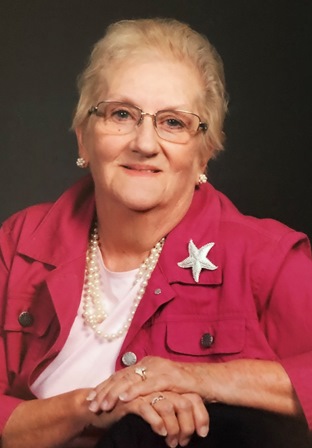 Betty Anne Marshall Vines was born on November 28, 1942 in Fredericksburg, VA.  She left her earthly body and entered into the gates of Heaven peacefully on August 10, 2019 with her family by her side.

Betty grew up in Virginia as the sixth of seven children born to Alvin and Beulah (Garrett) Marshall.  She met her husband James Vines while in high school at Newport News High School and they married when she was just 17 years old on April 14, 1960. Together, they raised four boys: Jim, Jr., John, Jerome, and Jeff.  In 1979, the family moved across the country to Idaho Falls, ID where her husband, Jim, took a job at Idaho National Laboratory. When Jim’s contract was completed, he took a job with Rockwell International at the Hanford site and moved the remaining family to Richland, WA. During this time Betty earned her business degree from Columbia Basin Community College and was very active in her church, Richland Baptist Church, including serving as the church secretary. In 1996, Betty and Jim moved to Boise, ID when Jim got a job at Micron and to be closer to their granddaughters, Olivia and Abby. Betty worked for the Boise School District as a special education aide as well as volunteered in her daughter-in-law’s classroom.  In 2004, they began to search for a permanent place for retirement. This search led them to Allyn, WA but shortly they moved back to Virginia where Betty took care of her ailing mother, Beulah. Upon her passing, Jim and Betty decided to make the Tri-Cities their permanent home and set up a home in Pasco, WA in 2006. Betty was a strong believer and enjoyed her time at the church, often volunteering to teach Vacation Bible School and working with the MOPS (Mothers of Preschoolers) group as well as doing many activities with the seniors. She also taught at the Jesus Loves Me Preschool. She and her husband joined the Southern Baptist Disaster Relief where she worked as a chaplain and on the clean-up crew, providing relief for families dealing with natural disasters.

Betty was a light and brought joy to everyone she met. She was a social butterfly who enjoyed talking to and getting to know everyone she met. She always told people “I’m grandma; I’ll be your grandma.” She loved the color blue, gardening, lighthouses, and collecting seashells when she visited the beach.  Her grandkids were the joy of her life and she loved spending time with them. She was able to take a trip to Florida to see Jimmy and Blenda this winter. She also took a trip with John, Jill, Olivia, and Abby to New York City and Boston in June and kept up with them on all of the fun activities they enjoyed together. These are precious memories that we will always have.  She was deeply loved and will be greatly missed.

Betty was preceded in death by her husband of 57 years, James Franklin Vines Sr., her parents, and her siblings Ivan, Albert, Alvin, Jr., Charles, Juanita, and Ted.  She is survived by her children James Franklin Vines Jr. (Blenda) of Bradenton, FL, John Vines (Jill) of Boise, ID, Jerome Vines of Henderson, NV, and Jeffrey Vines Sr. of Richland, WA; her grandchildren Olivia, Jeffrey Jr., Abby (Brandon), Nicholas, and MaKayla; and many nieces and nephews.

The family would like to thank Dr. Clark and Dr. Alawi, as well as the many nurses at Swedish Neuroscience Institute in Seattle, WA for the care they gave Betty and the attention and care they showed to her family during her time there.

A private graveside service will be held for family and close friends. There will be a memorial service held at Richland Baptist Church on Saturday, August 24 at 2:00 pm.