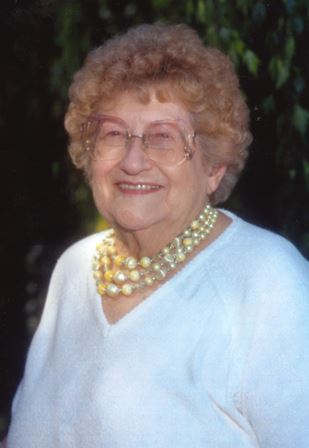 Lucille Marie Mattis of Richland passed away on August 4, 2019. She was born May 14, 1922 in St. Boniface (Winnipeg) Manitoba, Canada to Joseph and Eugenie Proulx.  In 1923 the family emigrated to the Mesabi Iron Range in northern Minnesota where her father worked in the mines along with many other immigrants.

Lucille graduated from Horace Mann High School in Biwabik, Minnesota, in 1940. In 1941, after attending nearby Evelyth Junior College for one year, she moved to Washington, D.C., where she went to work as a stenographer in the War Department as a civilian employee of Army Intelligence. In 1942, she moved into the newly completed Pentagon where among other tasks she typed up the plans for Operation Torch - the invasion of North Africa – America’s first offensive campaign in the European Theater.

In 1943, she was assigned to the Office of the Military Attache at the U.S. Legation in Pretoria, South Africa. She embarked from New York by ship along with other diplomatic personnel and a cargo of ammunition, was escorted by destroyers for protection from German submarines to the Panama Canal, and then traveled down the west coast of South America, around Cape Horn and then to Capetown. En route she met one of the ship’s mates, a Merchant Marine officer named West Mattis. When she left the ship in Capetown, they decided to write to one another and, after the war ended, they married in New York City on November 19, 1945.

When West was transferred to a new homeport in San Francisco, Lucille worked for the Commonwealth Club of California in San Francisco until their son Tom was born in 1948. West subsequently left the Merchant Marine and, in 1950, the family moved to Pullman, Washington where he went to work at the Washington State College power plant. Son Jim was born in Pullman in 1950.

In 1952, the family moved to Richland when West went to work at the Hanford site. Lucille worked variously for the US Army at Camp Hanford, the Richland School District and took time off to have a third son, Gerald, also born in Pullman in 1955. Lucille subsequently worked for the Atomic Energy Commission and managed office services for Vitro Engineering, completing her career as a contracts officer with Washington Public Power Supply System. Following her retirement she volunteered with the CHREST museum in Richland.

Lucille was a fiercely independent woman who exemplified the spirit of the women of her generation - shaped by the Great Depression, tempered and forever marked by their monumental contributions to our nation during the Second World War. She imparted to her family a love of reading and a curiosity about the world that endures. Our lives were shaped by her values and example and made richer by her having been among us.

In lieu of flowers, the family asks that a donation be made in Lucille's name to Planned Parenthood, the Union Gospel Mission or Meals on Wheels.