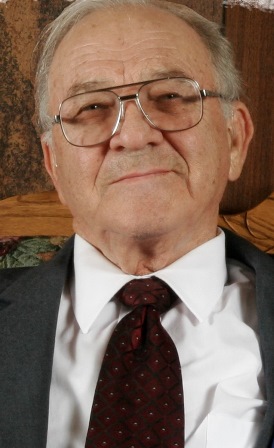 Oris Devoe Goodey passed away August 2, 2019 at the Chaplaincy Hospice House in Kennewick, surrounded by family members. He was 94 years old.

Oris was born March 26, 1925 to Thomas and Martha (Barson) Goodey in Midvale Utah. He graduated from North Cache High School in 1943 where he met his future wife Helen Kent. Shortly after high school, Oris was drafted into the US Army and fought in the European Theater in World War II as part of the 34th Infantry Division (Red Bull). Major campaigns in Italy included Anzio, Rome-Arno, the North Apennines, and Po Valley. During the war, Oris received several medals including the Purple Heart and the Bronze Star as well as the Combat Infantry Badge.

Oris attended Utah State University earning a bachelors degree in vocational education. He and Helen moved to Tropic, Utah with their two young sons for his first teaching job. When school was out during the summers, Oris worked as a forest ranger in the Grand Canyon.  They loved living in a log cabin on the north rim.

Oris and Helen moved to Richland in 1957 where he worked as a special ed vocational teacher and added two daughters to their family. Oris soon earned his masters degree in special education from Utah State University.  After 30 years with the Richland School District, he retired in 1987. Until his death, he still received letters from former students, illustrating the impact he had on the lives of his students.

Oris was a lifelong member of the Church of Jesus Christ of Latter-day Saints, serving in several positions of leadership in the Church. He and Helen also served as temple workers, first in the Seattle Temple and, later, in the Columbia River Temple in Richland serving faithfully for over 20 years.

Oris was a wonderful woodworker and made many treasured gifts for friends and family. His favorites were his wooden trains, baby rattles, and duck push-toys. Many people would ask him to build something and his response was, “If you can draw it, I can build it.”   He and Helen worked side by side as they remodeled the “A” house that they raised their family in and called home for almost 60 years. Oris could also grow anything, which was evidenced by their back yard -- apples, cherries, pears, plums, walnuts, figs, artichokes and his beloved grapes flourished because of his green thumb.

Oris was preceded in death by his wife Helen, his parents and all of his siblings. He is survived by his children and their spouses: Kent and Connie (Clement) Goodey, LeVan and Chris (Huntington) Goodey, Camille and Scott Page, and Shannon and Tim Turner. He also leaves behind 18 grandchildren and 18 great-grandchildren.

A video slideshow can be seen at this link.      https://youtu.be/JUtordWUVJM