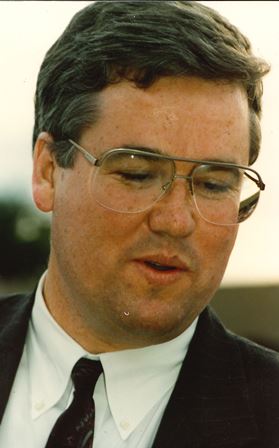 Jeffrey William Reis (“Jeff”), age 62, was born in Richland’s Kadlec Hospital on November 9, 1956. He passed away peacefully in the same hospital on September 5, 2019, with family and friends in attendance, after a years-long battle with congestive heart failure. Jeff’s formative schooling all occurred in Richland: he attended Sacajawea and Jefferson elementary schools, Chief Joseph junior high school, and Hanford and Richland high schools. Throughout his school years, Jeff was always an exceptional student. For example, Jeff graduated from Washington State University, Summa Cum Laude with a 3.98 GPA, earning a Bachelor of Science degree in the scholastically demand field of Chemical Engineering. Jeff next obtained his Juris Doctor degree from the University of Washington School of Law. After passing the state bar exam and becoming licensed to practice law in Washington State, Jeff studied for, and passed, the profoundly challenging federal patent law bar exam on the first try (patent law attorneys comprise less than 2% of the entire attorney population). During his 31-year legal career while residing in Seattle, Jeff practiced mainly in two areas: intellectual property law (patents, trademarks, and copyrights – with his mainstay being patent litigation in federal courts) and personal injury law. Jeff was a determined and focused warrior for his clients and he typically obtained fantastic results for them. Jeff was always an avid reader because he had a particularly inquiring mind and a vast diversity of interests – so that you couldn’t ask him a question about almost any subject without learning several new things about the subject from his responses. Many of Jeff’s friends and family were tagged by him with affectionate nicknames. He regularly displayed his keen wit and shared his hilarious observations about life and the world in general. Jeff enjoyed golfing and ALL music. With his independent and courageous spirit, Jeff overcame each of the obstacles life threw his way. He therefore fearlessly maintained an optimistic outlook about his illness. For example, a couple of months before his passing, Jeff moved back to the Tri Cities for what we all hoped would need to be only a temporary convalescent period with help from his family and friends. During that time, he regularly spoke about making his move from Seattle to the Tri Cities permanent. He was looking forward to semi-retirement back home. For another example, during his final lunch with some of his friends just two days before his passing, Jeff was gathering opinions from them about which golf course he should join as a member back in Tri Cities. Jeff was always the “go to guy” for family members, friends and colleagues, a natural leader with a magnetic personality! Jeff was preceded in death by all four of his grandparents, father CW Reis and his brother Troy. Jeff is survived by his mother Dona Belt, stepfather Larry Belt, and brothers Kyle Reis, Gregg Belt, and David Belt (Shelli) – as well as numerous extended family members. A memorial service will be held at Bethel Church, 600 Shockley Rd. (off Keene Rd.) in Richland WA on Saturday, October 12, 2019 at 1:00 pm. All are invited to attend. Immediately thereafter, all are invited to the West Richland Golf Course clubhouse for storytelling and further celebration of Jeff’s life, with food and drink there provided by the family. Count it as a privilege if he ever touched your life with his fantastic caring heart and listening skills. He lives on in all our hearts FOREVER!!