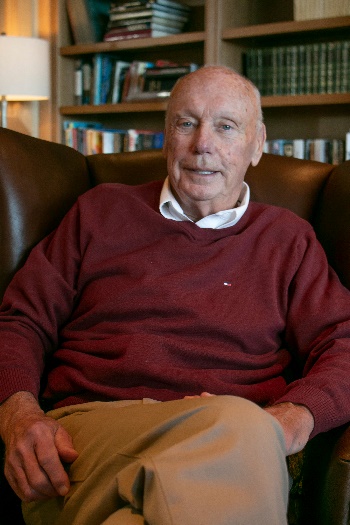 Celebration of Life with Military Honors

On Wednesday, October 30, 2019, Donald W. Smith left this earth to be reunited with his wife, Victoria A. Smith, who was the love of his life for 54 years. Don was known to be the kindest, strongest and most loving man with great character and generosity. He was loved by all who met him.

Don was born in Pasco, WA to Theo and Isla Mae Smith on October 7, 1942. He spent his childhood in the Tri-Cities and graduated from Richland High School in 1960. He went on to WSU, during which time he met his wife, Vicki. They married February 2, 1963 and together they decided to take their $300 and move to California.  He enrolled in San Jose State where he joined the Reserve Officer Candidate Program for the Navy. After their son, Sean, was born on August 1, 1967, he graduated with a Bachelor of Science in August of 1968. On Christmas Day of 1968, Don was deployed and dropped by helicopter into the Vietnam War. After his time in the Vietnam War he was stationed in Honolulu, HI where his daughter, Kim, was born on September 1, 1970. After several years in the Navy, Don and his family were stationed in Monterey, CA where he attended Naval Post Graduate School and received his Master of Science in Systems Technology in March 1978.  During his time in the Navy he was stationed in various locations with the final duty station at Puget Sound Shipyard where he retired in June 1989. Following his retirement, they moved to Las Vegas, NV where he was fiscal manager for the McCarran airport. His first granddaughter was born November 1995 which brought them home to the Tri-Cities, WA where they remained for 20 years. During this time, he received his certificate of CPA in 1995 and in August of 1998 he formed a partnership with Christy Lyckman, opening their firm Smith-Lyckman CPA. Christy turned out to be not only a great partner, but a great friend as well; he continued to work there until April of 2019.

Don and Vicki built their dream home, a log cabin on 20 acres, in Loon Lake, WA in 2002 where they shared time living there and their home in the Tri-Cities. This home became a treasure for family and friends to gather for reunions, parties and most of all fun. Their home supported his love for the outdoors, including boating, fishing, hunting and enjoying nature. While he enjoyed these things, his greatest love was his family and it brought him great joy to spend time with those he loved.