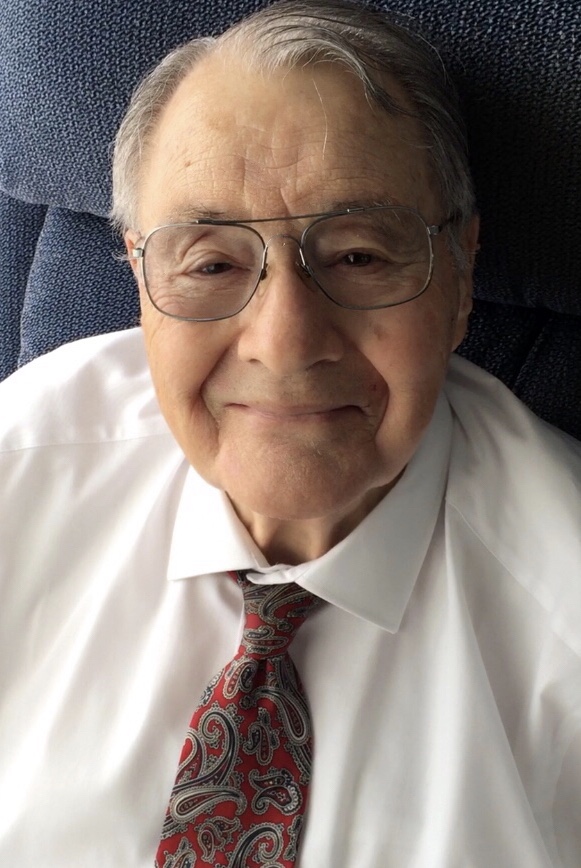 Earl J Wheelwright, age 91, passed away peacefully in the family home in Richland, Washington, on October 30, 2019. He was born to William Henry and Mary Arvilla Wheelwright on March 26, 1928, in Rexburg, Idaho. He is the oldest child from that marriage and has two younger sisters. William’s first wife passed away during childbirth, and he married Arvilla who also became the mother of his three children from his previous marriage. During high school, Earl’s debate team was Idaho state champions. He participated in track and football for Madison High School and later played for Brigham Young University on a football scholarship. When his brothers were called away to serve their country during World War II, Earl got up at 4:00 am prior to his going to high school each morning to drive their Wonder bread truck to make deliveries and help maintain his brothers’ business to support their families. Earl met his eternal sweetheart, Rayola Howell Wheelwright, at age 16 when she was attending Ricks College and visited his ward. Rayola asked him to a Sadie Hawkins dance within a few weeks and they dated for the next three years. They were married June 10, 1947, in the Salt Lake LDS Temple by Spencer W. Kimball.

Earl graduated from Brigham Young University with a B.S. in Chemistry and Iowa State University with a Ph.D. in Physical Chemistry. While at Iowa State, Earl was fortunate to be assigned to department chairman and world renowned chemist Dr. Frank Spedding. Upon graduation, Earl was recruited by several companies but chose General Electric at Hanford and the family which now included three children moved in 1955 to Richland, Washington. He later joined Battelle in 1965 and worked there for the remainder of his career. Earl pioneered the development of ion-exchange processes of selected actinide and fission-product elements. These included the co-development of widely used anion exchange processes for final purification of plutonium; an exchange method for the purification of promethium-147; and separation and purification procedures for americium, curium, and strontium-90. As a task leader in the Nuclear Waste Vitrification Project, Earl was responsible for the design, construction, and operation of a “hot” pilot plant facility for processing fully irradiated commercial nuclear fuel and recovering the high-level waste. He became the program manager for efforts to separate and purify yttrium-90 for medical use including cancer treatment which is still used today and for a process to leach plutonium from waste. Throughout his career, Earl was recognized as a leader in his field and was sought after by the Department of Energy for review committees and by other agencies for consulting purposes because of his vast expertise. He became one of Battelle’s first Scientist V’s in 1977. In 1993, Earl became PNNL’s first recipient of the prestigious Glenn T. Seaborg Award. He became a Fellow of the American Nuclear Society in 1994. Earl authored twenty-five professional journal articles, fifty reports and three book sections on chemical process development and the properties of fission products. He holds nine patents.

Although he was widely respected in his career, Earl’s priority was his family and his church. After arriving in Richland, he and Rayola had three more children. In 1962, when land was available, they helped form a corporation with other families and developed and constructed their own subdivision where they lovingly built their current home and raised their six children amongst choice friends. Earl was an active member of The Church of Jesus Christ of Latter-day Saints. He faithfully served in many positions including stake president’s counselor, bishop’s counselor, stake mission president, high priest group leader and high councilor. In 1982, Earl and Rayola began working as ordinance workers in the Seattle LDS temple. They drove four hours each way twice a month and later each weekend to fulfill their temple assignments. In 1994, they were called to serve in the New Jersey Morristown mission. During their 18 month mission, Earl served as a counselor to the mission president. His leadership experience and love for the missionaries was a great asset to the mission. When the Columbia River LDS Temple was built, Earl was called to serve as first counselor in the temple presidency and later as the temple president. This six-year temple assignment was a time of great happiness for Earl as he and Rayola worked closely together serving our Heavenly Father full-time and making many new friends.

Earl exemplified hard work. He was resourceful and skilled at fixing most things at his home. He was known for having a well-maintained yard and grew a large garden. Earl enjoyed fishing, participated in genealogical research, and served the Boy Scouts of America for many years including two terms as president of the Blue Mountain Council. He was honored with Scouting’s Silver Beaver Award. He was always a man his children and grandchildren could look up to and respect. Earl spent a lifetime being an example of kindness, love, sacrifice, integrity and service. He courageously fought through serious medical issues more than once and lived on borrowed time for years in order to stay on this earth and continue to care for and be at the side of his “eternal sweetheart” Rayola. His love for and devotion to her has impacted all those who knew him and is his greatest legacy. Earl was a gentle and humble man who loved and had a strong testimony of our Savior, Jesus Christ, and tried to be an example of Him throughout his life.

The family would like to express their gratitude to the many friends, neighbors, and church members, as well as Earl’s caring medical professionals including Dr. Erick Isaacson and the PCM staff for their numerous acts of kindness, service and compassionate care during his final years.