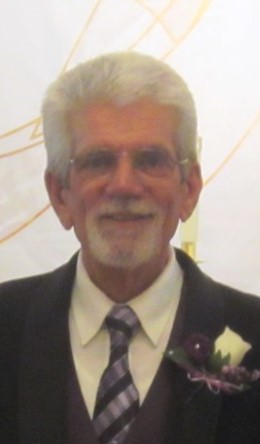 Archie was born at Our Lady of Lourdes Hospital, Pasco, WA on 2-20-46, the oldest of four children of Hamilton “Stormy” Cloud and June (Klink) Cloud. He died from complications of C.O.P.D. He attended Pasco High School and played the bugle in the Drum and Bugle Corp. He did a short stint in the U.S. Navy located in San Diego, CA and was honorably discharged. Here he met his first wife, Linda Bridges. To this union two sons were born, John and Steven. Their marriage was short and ended in divorce. Archie was granted sole custody of his sons. In 1973, Archie married Kathleen “Kitty” Stapleton. They made homes in Phoenix, AZ, Oahu, HI, Anchorage, AK, then back to Pasco, WA. His second wife “Kitty” died suddenly on Sept. 30, 2007. He then met Deborah A. Rowley-Vakoc (also widowed since 2008) at the Kennewick Eagles Lodge, midnight Dec. 31, 2012. Their first date was New Years Day 2013 and were inseparable after that. They were united in marriage on Sept. 6, 2014. Arch worked in the automotive industry all his life and after retirement, decided to be a school bus aide for handicapped children for the Pasco School District for 9 years alongside his sister Dixie. Archie developed a passion for fishing while in Alaska (a sport Debbie loved just as much!). If he wasn’t outside Bar-B-Queing year round, they’d be at the Eagles dancing, camping, boating (and fishing of course) with lots of cold beer for Arch! Archie was pre-deceased by his parents, wife Kitty, his first sister Dixie (Cloud) Bass (Jan. 2019). He leaves behind to grieve his passing, beloved wife Debbie, Kennewick, WA; sister Laura (Joe) Schmidt, Richland, WA; sons, Johnny (Carrie) Cloud Sr., their sons, Jared and Tyler Mier of Auburn, WA, Steven Cloud of MA. Favorite grandson, Johnny (Amber) Cloud Jr., with his 2 “great”-grandsons, Alex and Tobias, of Federal Way, WA. Four nephews and 1 niece, great nephews, nieces, and cousins. His step-daughter-in-law, Terri (Eric) Orpet of Phoenix, AZ. Very best friend and fishing buddy, Dave (Rhonda) Stranger of Anchorage, AK. His dearly loved furry, four-legged children, Lilly and Taffy. Archie and Debbie were members of Christ the King Catholic Church. Visitation will be at Einan’s at Sunset Funeral Home and service to follow, 915 Bypass Highway, Richland, WA, on Tuesday, Nov. 26 at 1:00 p.m. Cremation, entombment and memorial get together at a later date. In memory of Archie, make a donation to the Benton-Franklin Humane Society/ASPCA or P.O.P.P.S., 5811 W. Van Giesen St., West Richland, WA 99353 or The American Lung Association, 55 W. Wacker Drive, Suite 1150, Chicago, IL 60601. Thanks to Dr. Matharu and staff. You’re awesome! “If you smoke – STOP! If not for yourself, for the ones you love and love you.”