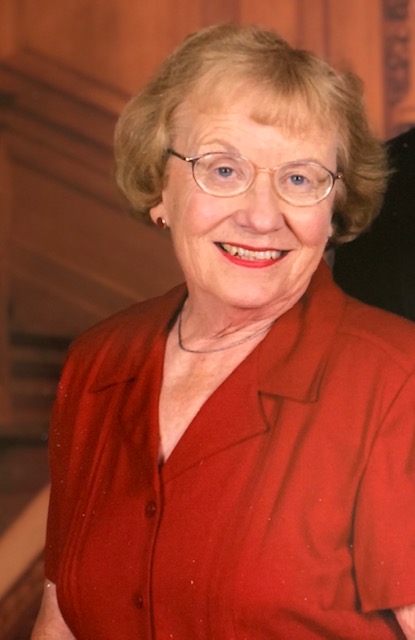 Our beloved Mom, Grandma, and Aunt passed away peacefully into the Lord’s hands on November 20, 2019 following a long decline due to Alzheimer disease.

Carol was born “Carol Jean Bovee” in Wenatchee on April 25th 1931.  She was born at the time of the annual Apple Blossom Festival and so was named after the reigning Apple Blossom royalty, Queen Carol McGough and Princess Jean Vermilya.  It was quite fitting, as it turned out, the apple industry would figure prominently in Carol’s life.

Carol grew up in Wenatchee with her cousin Elsie who the family adopted as her sister. Carol was energetic, fun-loving, and athletic.  She loved to spend summers swimming and boating at Lake Chelan, fishing with her Mom and Dad, hiking and camping.  She grew up in the depression and during the WWII years and the ideals of thriftiness, patriotism, and devotion to family and church remained foundational to her throughout her life.

Carol met her husband Rodger (Rod) Daniel while working in Wenatchee as a Food Tech at the Cedergreen Frozen Pea Plant. It was love at first sight. They enjoyed hiking, swimming, and tennis in their off-hours between the night shifts they worked together.  Carol left Wenatchee to attend Whitworth College in 1949 and then started nursing school at Sacred Heart School of Nursing in Spokane, graduating in June, 1953.   Rod was finishing his senior year at Oregon State during this time and the two managed to stay close via a steady stream of letters in the 3 years they were apart.  Carol and Rod were married at St. Paul’s Lutheran Church in Wenatchee, WA after Rod had joined the Air Force.  After a brief honeymoon, they were stationed at Randolph AFB in San Antonio, TX.  Rod was with the Space Flight Program in the Veterinary Science Division, School of Aviation Medicine and Carol often helped him take care of the Rhesus monkeys in his charge, with many hilarious adventures ensuing.  Rod needed a lot of help with taking care of the monkeys as they were always escaping and Carol was good at catching them.  After Rod’s discharge in 1955, the young couple came to the Yakima Valley for Rod’s 1st job at Del Monte in Toppenish. Son Tom was born Jan. 1, 1956 as the 1st baby of the New Year. The family moved back and forth from Toppenish to Yakima and then spent 2 years at the Vancouver, WA plant.

In 1962 Carol and Rod became the proud owners of a 40-acre apple orchard on Lucy Lane in Zillah, WA.  The family grew as Dave, Sally, and Molly were born. The Zillah orchard was home for more than 30 years.  The family all helped in the orchard and many friends worked in the harvests.  Carol helped out at the Zillah schools the kids attended.  All the kids graduated from college and Rod and Carol retired to their new home in the country north of Selah.

During their retired years Carol and Rod traveled for month-long RV trips each Fall, exploring the entire country. Carol enjoyed being involved with her grown-up kids and their new families and the grandkids as they came along. Carol loved pioneer history and was a well-known patron of the Selah library for many years.

Carol was a long-time member of the Yakima First Presbyterian Church (now Grace of Christ Church).  She served as camp nurse at Camp Ghormley for several years, fixing up camper’s cuts ‘n bruises.

Carol was preceded in death by her husband Rodger Daniel, parents Arthur and Alma Bovee, sister, Elsie Haney, and her son Thomas Daniel.

If desired, in lieu of flowers donations in Carol’s name may be made to Ghormley Meadow Christian Camp, c/o Einan’s Funeral Home.

A funeral service will be at 11:00 am, Saturday, November 30, 2019 at Bethel Church (Desert View Room) in Richland, burial will follow at Sunset Memorial Gardens in Richland, WA.