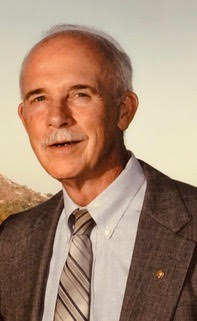 Patrick Charles Thompson, Scottsdale, AZ, passed away suddenly on January 30, 2020, of a brain aneurism. He was born June 21, 1941 in Stewartville, MN to Hiram Otis Thompson, and Violet Wilma Russell, both of Stewartville.

Pat attended grade school in Richland, WA. He was active in the Boy Scouts of America, achieved the rank of Eagle Scout, and was proud to have attended the 1957 National Jamboree in Valley Forge, PA.

After graduating from (Columbia) High School in 1960, Pat attended college at Columbia Basin College and Eastern Washington University in Cheney, WA, where he earned his B.A. degree in finance. He was hired by Bechtel Corp, in Richland, and after a few years transferred to the San Francisco home oﬃces, supporting payroll systems worldwide. He married Marcia (Bird) Thompson, in 1974; they resided in San Mateo, CA for many years before moving to Scottsdale, AZ. He spent the last five years of his career at Bechtel’s Glendale oﬃces before retiring after a 35 year career with the company.

Pat was very active in his community of Grayhawk, serving on its Board of Directors for several years. He was preceded in death by his sisters Lois Neble, Donna Jackson, Geraldine Parsons, and his twin sister, Patricia Thompson. He leaves numerous nieces and nephews, his sister Sally Housley, of Rio Rancho, NM, and Marcia Thompson, his wife of 45 years, His final resting place will be with family at Einan’s Sunset Memorial Gardens, in Richland, WA.

Pat will be remembered for his kindness, gentleness, and integrity.

“This little light of mine, I’m going to let it shine”