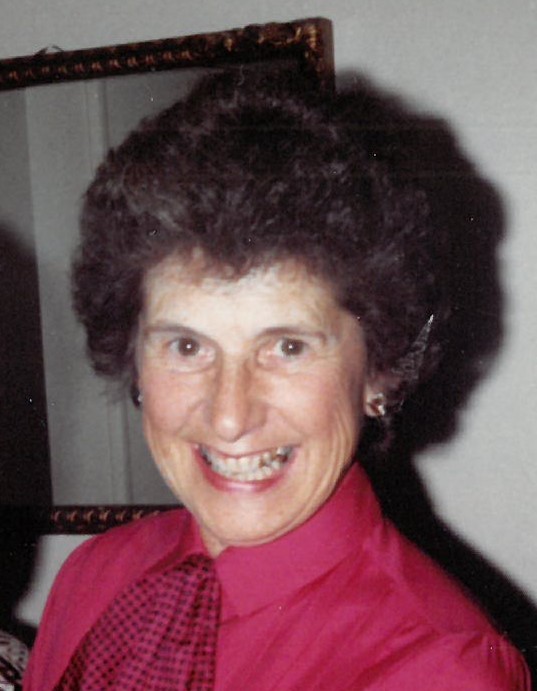 From Kennewick, WA | Born in Tillamook, OR

Lillian Lucille (Vogt) Jacobs passed away peacefully with family at her side on Wednesday, February 5, 2020.  Lil was born the fourth child of Theresa (Emmenegger) and Erhardt Vogt on November 6, 1928.  She joined older sisters Theresa and Alma, and brother, Sonny, as the youngest child of Swiss immigrants.  She was born in Tillamook, OR and raised on a dairy farm.

Lil was very social throughout her life, and did not favor the solitude of the farm.  She was forever indebted to her older sisters for hiding her from their dad when it came time to milk!

Lil graduated from Nehalem High School in 1946 and moved to Tillamook to work in a drugstore.  There she met Lawrence (Jake) Jacobs, who was recently discharged from the U.S. Marines after WW II, and who proposed after a brief courtship.  They were married at Sacred Heart Catholic Church in Tillamook on November 27, 1948.  This proved to be the beginning of a 58 year marriage, ending when Larry passed away in 2007.

In 1951 their first son Ben was born and Larry was called back to the Marines for the Korean War, and the young family moved to Camp Pendleton and Oceanside, CA.  After the war they returned to Tillamook where Robert joined the family.  Shortly thereafter the expanding family moved to Portland where Larry joined older brother Basil in his HVAC business.  In the mid 1950’s Scott and Richard completed the family, and the next several years living in North East Portland (near a large extended family) were full of youthful activity.

In 1961 Lawrence and Lillian gathered their four boys and moved to Richland to expand their HVAC business, and what began as a one year work commitment turned into a lifetime!  With four active sons over the span of six years and several moves, Lil kept very busy managing a household.  She embraced her role as a mother and viewed her most important job as raising her boys.  Lil’s boys were an extension of her and Larry, and she made sure that when they walked out the door their appearance was appropriate and their behavior respectful!  She encouraged us in school, sports, and work, and expected achievement and good behavior in all that we did.  Lil had a sixth sense with her boys, and knew when something was amiss or when it was time to tighten the reins!

After the boys were grown, Lil went to work for her dear friend Carol Stanfield in her floral shop.  Through Carol Mom was exposed to golf and became passionate about the sport.  She worked at Sham-na-pum Golf Course for many years, and her social and upbeat nature was on full display and greatly appreciated in the pro shop and on the course.

Lil’s first grandchild Meghan was born in 1987, followed over the next 14 years by Robert, Theresa, Daniel, Brett, Maddi, Mollie, Catherine, Allison, and Scott.  Just as Lil had been a great supporter of her sons, she was a fan and supporter of her grandkids as well.  She reveled in their accomplishments and loved seeing them up until the end.

In addition to shepherding her family, Lil greatly enjoyed sports.  She bowled in a Wednesday evening league for years, and the following morning at breakfast enjoyed telling her boys how she did the night past.  She discovered golf in her later adult years, and was instantly hooked.  It allowed her to be competitive, social, and work on developing a new passion all at once.  Even in her last years living in retirement facilities, she loved competing in any activity that involved throwing an object at a target and outscoring her friends.  In life as well she demonstrated her fierce competitiveness until the very end, rebounding from physical setbacks to live far longer than any of her loved ones predicted.

Lillian was preceded in death by her parents, three siblings, and husband Lawrence.  She is survived by “her boys” Ben (Chris), Bob (Mary), Scott (Jody), Rich (Lisa); ten grandchildren; many cherished nieces and nephews; numerous friends of her and Larry’s; and countless friends of her boys who shared in the love for Lil.  She had an amazing knack for remembering names and faces, and truly loved her sons’ friends.

Lil was a member of Christ the King Catholic Church since 1961.  She was a faithful volunteer at Christ the King School when her boys were in attendance.  In her later years she enjoyed volunteering at Kadlec Medical Center and the Richland Food Bank, sharing her beautiful smile and kind thoughts with all.

A heartfelt thank you to Father O’Shea and his assistants, and Deacon Alfredo Jocson, all of whom visited and prayed with Lil frequently during her last years.  A special thank you for the kindness and care shown our mother by Dr Sam Datta, and the many very special caregivers at Calloway Gardens, where Lil lived for nearly three years.  Thanks also to Dr. Wayne Kohan, Jolene, and their team at Hospice.

A Mass of Christian Burial will be celebrated at 11:00 AM on Saturday, February 15, 2020 at Christ the King Catholic Church, 1111 Long Avenue, in Richland, Washington.  A celebratory gathering of family and friends will occur immediately following mass.

Thanks for a lifetime of sacrifices, great memories, and your endless love Mom – you were the best Mom four boys could have!