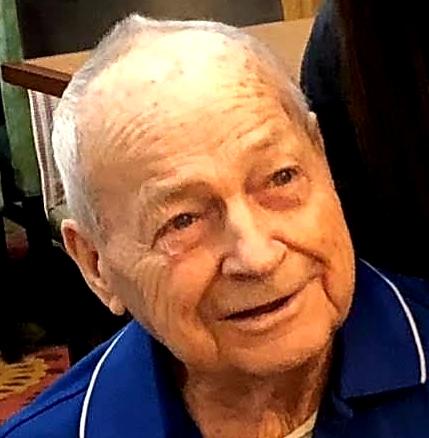 The family of Myles Van Leuven share news of Myles’s peaceful passing from this life on Thursday, March 12, the night after his 90th birthday. Myles will be greatly missed by 2 surviving sisters, Lita, and Ila, 5 children, Kirk, Kaelin, Martin, Richelle, and Zane, 22 grandchildren, and 33 great-grandchildren.

Besides his own family, a large number of friends, neighbors, co-workers and their families affectionately knew Myles as “grandpa,” and this because of his heart of gold, always supporting others in the friendliest way. Since 1980 he was closely associated with Broetje Orchards and the community of Vista Hermosa, and Jubilee Ranch. He will be missed by all.

Born in eastern Idaho, and raised in farming and ranching family, Myles was one of 4 sons and 3 daughters of Lester Van Leuven and Leona Hall. A graduate of Utah State University, with degree in education, he went on to a short career as an officer in the U.S. Army, and battery commander of the Toppenish National Guard unit of the reserves.

Myles married and was sealed to his college sweetheart Carlie Anne Clegg in 1951 in the Idaho Falls temple of the Church of Jesus Christ of Latter-day Saints. He became an award-winning teacher in the Toppenish Jr. High School, and coached Jr. High and High School track and football. His positive coaching was encouraging to many young athletes. He was an Elder and High Priest in the church, and served for a time in the Stake Mission Presidency.

Staying true to his agricultural roots, Myles left the teaching profession after 18 years to pursuit interests in the people and products of the Washington fruit industry, working closely with the packers and growers of Stadelman Fruit, Washington Fruit and Produce, and Broetje Orchards. He owned his own orchards and worked as field representative. He worked hand-in-hand with Ralph and Cheryl Broetje and their team on the development of that visionary operation and community.

Due to the new restrictions by the governor family will be holding private services for Myles.

Due to current limits on gatherings, condolences may also be written in memorial to: