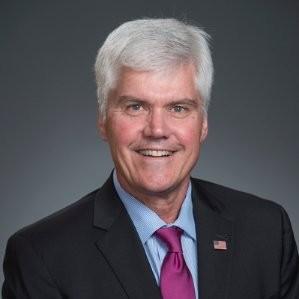 On July 19th, the Tri-Cities lost one of its biggest champions, Brad Fisher. He believed in giving back to the community he loved so much and embodied the Rotary motto “service before self.” Brad was a former Kennewick city council member, the youngest Kennewick mayor (age 32 in 1988-89), member and chairman of the Benton County Republican Party, board member of the Tri-Cities Cancer Center and Mid-Columbia Reading Foundation, and an active member of WSU Tri-Cities advisory council and Tri-City development council.

Raised in Kennewick, Brad was born in 1956 to Bob and Shirley Fisher–his favorite golfing companions. He grew up across from the Tri-City Country Club, and even as a young boy, was well known by the members for his winning smile, greeting everyone by name and inquiring about their families and golf game. In 1975, Brad graduated from Kamiakin High School and continued his education at the University of Washington before transferring to his beloved Washington State University. He took great pleasure in teasing his Husky friends that “everyone should start at a junior college.” Brad loved being a Coug! He enjoyed attending football and basketball games and enthusiastically supported all things WSU Tri-Cities!

After finishing his business degree in 1979, Brad moved back to the Tri-Cities where he began his financial advising career at Murphy Favre. In 1985 he became managing director at Piper Jaffray where he spent the next 20 years. During this time, he met his wife Jennifer and after a 2-year courtship, they were married in 1993. Together they raised four children. He adored them and loved supporting all of their academic and athletic endeavors. As a family, they enjoyed traveling, entertaining, and of course watching their Green Bay Packers. One of Brad’s proudest investments is being a shareholder of the Packers and becoming a season ticket holder after 29 years on the wait list.

In 2006, Brad helped launch the Tri-City RBC Wealth Management office. He took pride in assembling an exceptional group of advisors and assistants who along with his clients brought him great joy. Brad was a confirmed workaholic. One of the saddest days of his life was having to retire from his “second home” in 2019 after being diagnosed with stage IV glioblastoma. This horrible cancer did not stop Brad from wanting to improve life in our community. One of the first things his family heard from Brad after he came out of brain surgery was him urging the hospital staff to support the effort for the Tri-Cities to regain local control of the Columbia River shoreline!

Brad is preceded in death by his parents Bob and Shirley Fisher. He is survived by his wife Jennifer; children Chelsea (Jesse) Goff, Lindsey, Zachary, and Quinci Fisher; grandchildren Kipton, Penelope, and Cooper; and sister Stacie (Russ) Hamilton.

We are indebted to so many that have given us comfort and peace during this difficult time: The entire RBC family, Kadlec staff, Tri-City Cancer Center, Richland Fire Department, and Chaplaincy Hospice. In particular we would like to thank Brad’s life-long friend Bob Marple who sent Brad a daily email with pictures and videos to brighten his day.

In lieu of flowers, contributions to honor Brad’s memory can be made to the following charities that were important to him: The Tri-City Cancer Center, Tri-City Reading Foundation, Kadlec Foundation, Kennewick Police Foundation, Chaplaincy Healthcare, and the WSU Tri-Cities Brad Fisher Endowment Fund.

A celebration of Brad’s life will be held at a later date due to the pandemic.