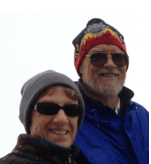 Barb was born in Schenectady, New York to Margaret and Erwin Boynton on
November 22, 1940. She moved with the family to Indiana, Pennsylvania,
Kentucky, and finally to an apple farm outside of Tecumseh, Michigan, as her
Dad followed his work at General Electric and Tecumseh Products. She was
joined in the family by older brother Don, and younger sisters Dorie and Mary.
The family had many pets over the years including dogs, horses, and a rescued
owl.
While in New York State, Marge, Erwin, Don, Barb, and the Rauch family
developed a small ski area named Skiland. They cleared the slopes, designed
and built the lifts, built the lodge, cooked and served meals, and offered lessons
and first aid.
Barb enjoyed many family trips and activities, including tennis, hiking,
backpacking, horseback riding, canoeing, skiing, and lots of card games. She
also participated in the family “ping pong ladder” which included her maternal
grandparents and trivia time from the Cleveland Plain Dealer.
After completing undergraduate work at Albion College, Barb earned a Masters
in Library Science at the University of Michigan. She met the love of her life,
Bryan, while at U of M, and they were married in Dexter, MI in 1963. Daughter
Marcy was born in Ann Arbor, Michigan. Bry completed his Doctorate in Physics
at U of M, and they moved to Moscow, Idaho where Bry taught physics at the
local university. Son Russ was born in nearby Pullman, Washington. The family
relocated to several other university towns where Bry taught, and son Dave was
born in Cheverly, Maryland. In 1971 the family settled in Richland, Washington
where Bry taught at the WSU Graduate Center and worked for Pacific Northwest
National Laboratory. Bry’s parents and later, Barb’s parents, also eventually
relocated to Richland.
Barb stayed home until the kids were older, and later worked as a reference
librarian at many of the public libraries in the Tri Cities, and Columbia Basin

College (CBC).  She thrived on helping patrons find answers to a wide variety of
questions, and many of her co-workers became close friends.
Bry and her three children were the center of her life.  Weekends were typically
spent together, often in the outdoors hiking, jeeping, camping, and backpacking.
Winter weekends were filled with many skiing/snowboarding trips.  Barb loved
running with Bry, and completed a couple triathlons and the Portland half
marathon. She climbed multiple volcanoes and 14,000+ ft peaks with her family
and sisters including Mt Rainier, Long’s Peak in Colorado, Mt Hood, Mt St
Helens, Alberta Peak in Colorado, and Mt Adams, and frequently hiked the local
Tri-Cities trails and hills.  Russ and Dave took SCUBA lessons in college,
and encouraged their parents to certify.  She enjoyed many diving trips with the
family including in the San Juan Islands and Venezuela.   Barb loved to kayak,
canoe, sail, wakesurf, and swim in the local rivers and in Portland. She
completed the Columbia Crossing swim a number of times. Barb participated
and competed in weekly tennis matches and frequently could be seen at the local
gym. Most of all, Barb loved sharing all kinds of outdoor activities with her family
and friends.
Bry and Barb loved to cook, bake, garden, and share the bounty with family,
neighbors, and friends. Family Thanksgivings at Barb and Bry’s home were a
longstanding tradition. Barb enjoyed many genres of music and played piano, as
well as singing with several local groups. She read extensively, enjoyed writing
poetry and drawing, and played a mean game of cribbage. Barb was always
happy to accompany Bry while he learned aerobatic flying and competed in
contests around the Northwest.
Throughout her life Barb battled depression and anxiety, as well as many
challenging losses and life circumstances.  But Barb was a tough lady, and
managed to live a full and active life.  She gave and received much joy during her
80 years.   Barb’s heart broke when her beloved husband and best friend Bry
died in 2018.  She was unable to find a way to overcome the gaping hole in her
life, and chose to end her own life.  Til the end, Barb spoke about how lucky she
felt to have had such a wonderful partnership, and shared memories of her life
and raising a family with Bry.
After her kids were grown, Barb cherished travels with family and friends to
Switzerland, Germany, Italy, France, Scotland, and a trip to London to watch
Wimbledon matches. Son Russ and grandson Bryan accompanied Barb on the
Via Ferrata course in Murren, Switzerland. When Bry joined a team performing
risk analysis and safe closure of the Chornobyl nuclear site, Barb joined him in
Slavutych, Ukraine for a year and a half.  She and Bry traveled many times to
visit her sisters and brothers-in-law in California and Colorado. She and Mary
attended the WSU game at the Alamo Bowl, and took a three week trip to
Portugal and Spain.

Barb stayed young at heart and kept her sense of humor. She is described by
those who knew her as ‘game for anything’ and is known by her family as loving,
accepting, and caring. Barb and Bry welcomed their kids’ friends into their home,
took them boating, skiing, and hiking, and welcomed them as part of the family.
Barb was preceded in passing by her beloved husband Bry in 2018, after
celebrating 55 years of marriage. She is preceded in death by parents Erwin and
Margaret, brother Donald, parents-in-law Greenville and Mary, brother-in-law
John, and nephew Ruben.  She is survived by: sisters Mary, and Dorie (Brooks);
children Marcy (Francis), Russell (Teresa), and David (Maria); nephew Alfonso
(Amber); grandchildren Alexandria (Josh), Kelly (Jordan), Bryan, Rachael
(Taylor), Bradley, Alexander, and Isabella;  grand-nieces/nephews Trinity,
Nicholas, and Kyzaiah; great grandchildren Troy, Lucian, and Lykian; and many
of their kids’ friends whom they considered to be part of the family.
A memorial will be planned at a later date.
If you wish to make donations in lieu of flowers, please contribute to your favorite
charity. Barb &amp; Bryan supported a number of causes including Friends of Badger
Mountain, Public Broadcasting, National Public Radio, SIGN, homeless/wounded
Veterans, Native American causes, POPP, and the Humane Society,