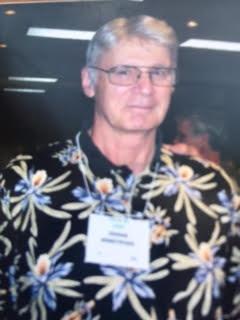 Dennis sure loved to play ball! He played baseball and as an adult I recall many years of him
playing on teams with other men. He enjoyed fishing for a season in his life; he lived in the time
when steelhead fishing was running in abundance and he trolled the mighty Columbia for a
chance to enjoy a tasty fish dinner. After he served in the navy, he came back to WA and
received his degree in chemical engineering from WSU; he remained a diehard Cougars fan for
the rest of his days! Dad took his granddaughter, Jessica, with him to several games. After
retiring, dad and his wife Judy enjoyed seeing the world through several cruises and timeshare
vacations. Later, Judy suffered from Alzheimers. He lovingly cared for her in their home, where
she stayed until she took her last breath. Then, last summer, he discovered the cancer was
back. I came to care for him in the month of October…he fought the battle until Monday, March
2nd, when his body had nothing left. He passed from the pain and suffering into peace.

The Tri-City Cancer Center was incredibly kind and generous while he went there. In lieu of
flowers, please send donations in his honor to:

Thank you to Charmine at Hanford Home Health and to the loving, tender, competent care and
support team who cared for my dad and allowed him to be in his home until his last day on this
earth.
Dad’s request was to be cremated. In place of a memorial service, please share your thoughts
and memories about Dennis on the Einan’s webpage.